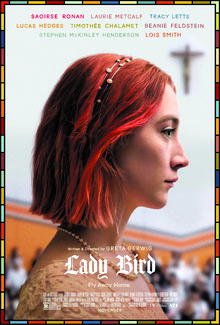 “Lady Bird” is a winning comedy-of-age movie that takes place in Sacramento during a girl’s senior year at a Catholic high school.

It is set in the years 2002 and 2003, so it was able to take this viewer back to his high-school days, back when 9/11 was big news and cellphones were still a fairly new thing.

Saoirse Ronan (from the film “Brooklyn”) plays the title character (a nickname she prefers) who is determined to attend an East Coast college. She frequently argues with her mom Marion (Laurie Metcalf from the TV show “Roseanne”), both of whom have strong personalities, while her father Larry (Tracy Letts) is the peacemaker.

Very well-written and performed, the film skillfully portrays the ups and downs of high-school, making it both fun and relatable. It explores issues of economic disparities, religious irreverence, independence, and best friend/opposite sex relationships.

Lady Bird lies about where she lives to a new friend to avoid the shame and embarrassment she associates with her lower middle-class existence.

We see Lady Bird and her friend chowing down on communion wafers when a fellow student walks in on them aghast. In another scene, Lady Bird plays a joke on one of the nuns at school. Lady Bird’s personality is one to not take things too seriously.

Lady Bird strives to be free of her parents’ rules by getting as far away as possible from Sacramento – “the Midwest of California” as Lady Bird disparagingly calls it.

Lady Bird is really close to her best friend Julie, who struggles with weight issues and self-esteem. After being cast in the school play, Lady Bird finds herself attracted to Danny (Lucas Hedges, from “Manchester by the Sea”) and they quickly bond. Both actors have good chemistry together (he is warm and attentive to her needs) and Lady Bird is very impressed with his grandmother’s house, where he invites her for Thanksgiving. After witnessing something that changes her outlook on Danny, Lady Bird wants nothing to do with him, though it has nothing to do with his personality. Lady Bird’s rebel personality attracts someone at her school named Kyle (Timothée Chalamet), a local musician. Kyle tries to come off as cool and intellectual, though it is clear he is not as caring as Danny had been.

Ronan’s role has the most developed character arc in the movie, starting off on the selfish side and maturing as she sees those around her change.

A key scene late in the movie occurs when Lady Bird asks to be dropped off at her friend Julie’s house after the two of them had had their difficulties. The ending, meanwhile, is poignant without being overly sentimental.

Director Greta Gerwig in her directorial debut shows much promise and I look forward to seeing what she does next.