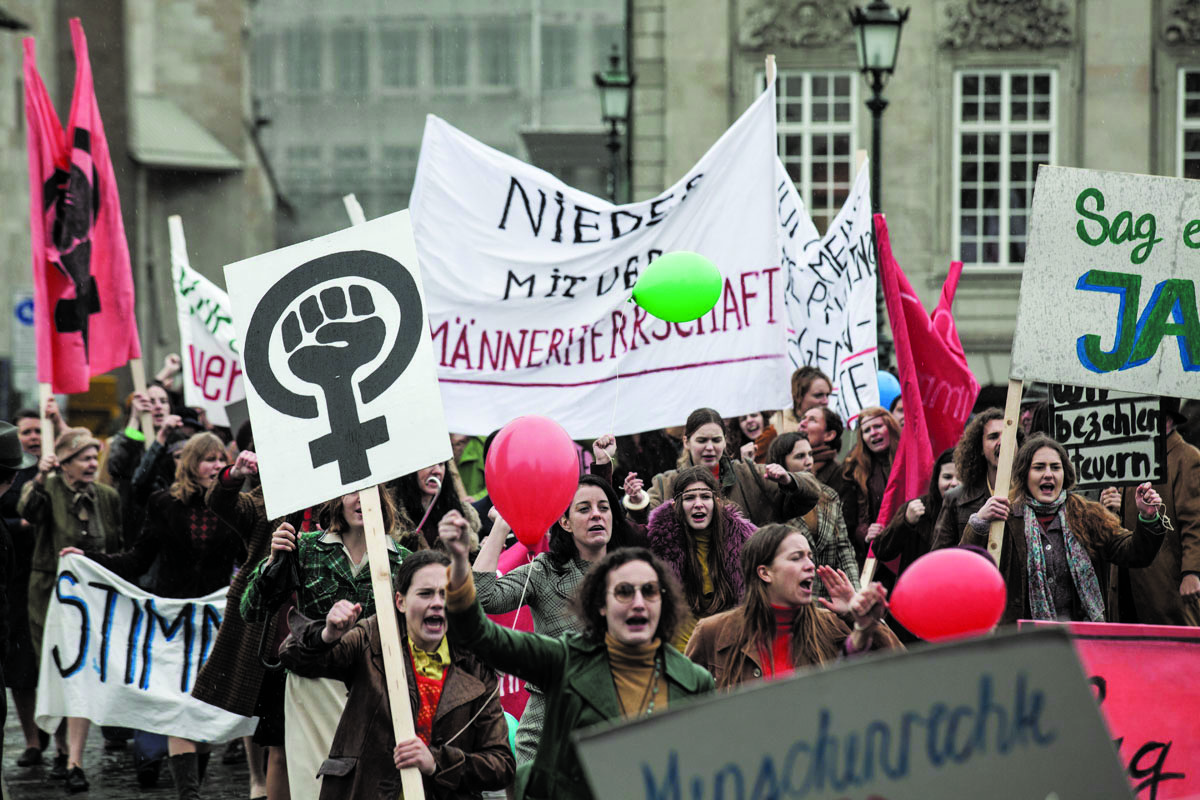 It may come as quite a surprise to you to learn that the women of Switzerland fought for the right to vote for 100 years. In 1959, 67 percent of Swiss men voted against that ballot and the struggle continued until February 7, 1991* when that law was finally passed. The story of one woman’s struggle to be treated as an equal to men magnificently unfolds in writer and director Petra Volpe’s “The Divine Order,” Switzerland’s fascinating entry for the Best Foreign Language Oscar.

Combining the idea of the militant women from Aristophanes’ “Lysistrata” with the character of Nora, from Henrik Ibsen’s “A Doll’s House,” Volpe gifted us with a most compelling film. Under her acute, sensitive direction, we meet Nora, wonderfully played by award-winning actress Marie Leuenberger who burrows her heart and soul into her character. She lives in a small village in Switzerland and as a typical housewife, spends her days vacuuming, dusting, washing dishes, and carefully hanging out socks to dry on the exterior clothesline, which one could interpret as a metaphor. Despite being married to her loving husband Hans, skillfully played by Max Simonischek, he is a typical male who is a product of his life and times regarding women’s role in society. Nora is growing restless with a gnawing sensation that she wants to do more with her life than be a housewife, mother, and caretaker for her aging, unpleasant father-in-law. While going through the newspaper one morning, she comes across a help wanted ad for Swiss airlines and secretly applies for that position. Remember, this is early 1971 and not only can’t women vote, they must secure the permission from their husbands to work outside the home, which Hans, being quite happy with the status quo, says “no,” – not in a mean way, but reflective of the mores under which he was brought up and still living under. Being a product of her own upbringing, Nora is not sure how to get what she wants. One day while biking into town, she encounters a suffragette who is fighting for equality for women and gives the reluctant Nora literature on the movement. After absorbing the ideas outline in those pamphlets, and as the beautifully written narrative unfolds, Nora not only joins the movement but becomes one of the key organizers working closely with three other determined women superbly characterized by Rachel Braunschweig (Theresa,) Sibylle Brunner (Vronia,) and Marta Zoffoli (Graziella.) Despite her husband and sons being teased and shunned by their friends, Nora remains steadfast and mobilizes the other women in the village. Like the defiant women in “Lysistrata,” who withheld sex from their husbands until they agreed to stop going to war, Nora’s women are all now living under one roof and vow to stay there until the upcoming election which once again has the right to vote for women on the ballot. In the meantime the husbands tackle the chores their wives have heretofore been responsible for and, as you can imagine, there are some funny scenes with Hans and his boys as he tries to prepare meals but often winds up with pizza.

Nora organizes a town meeting to try to educate the men who are almost immovable. One anti-vote woman argues that they should put to a vote how many men would agree with Nora’s position and as one might expect, the hands of almost all the men shot up in defiance. One man threw a wadded up piece of paper, which landed on Nora’s nose, but there is not a hint that her life is actually in danger. Her husband does encounter some violent moments and what’s interesting is that his character, as well as some of the other characters, has an arc so that there is perceptible growth and awareness.

Augmenting the leading characters, Volpe assembled an excellent supporting cast of women and men who, under her strong direction, deliver fully actualized characters and include, Bettina Stucky, Peter Freiburghaus, Therese Affolter, Ella Rumpf, Nicholas Ofczarek, and Sofia Helin. It is also commendable that she does not vilify the men but more shows them as being victims of their own upbringing and their struggles with trying to understand their women.

“The Divine Order” is particularly relevant and timely as although the 19th Amendment to the American Constitution, ratified on August 18, 1920, gave women the right to vote, we are presently in the midst of a different kind of revolution as women finally have the courage to step forward and talk about sexual harassment that has been swept under the rug for decades. Volpe’s film illuminates the bravery of the Swiss women who could not be intimidated out of their commitment for equality, and perhaps in a subtle way, supports their American sisters who have been silent for far too long.

*It should be noted that not all local governments or Cantons enforced the vote. Appenzell Innerrhoden voted against women’s suffrage in 1973, 1982, and again in 1990 but later in that year, the Swiss Supreme Court forced then to comply.