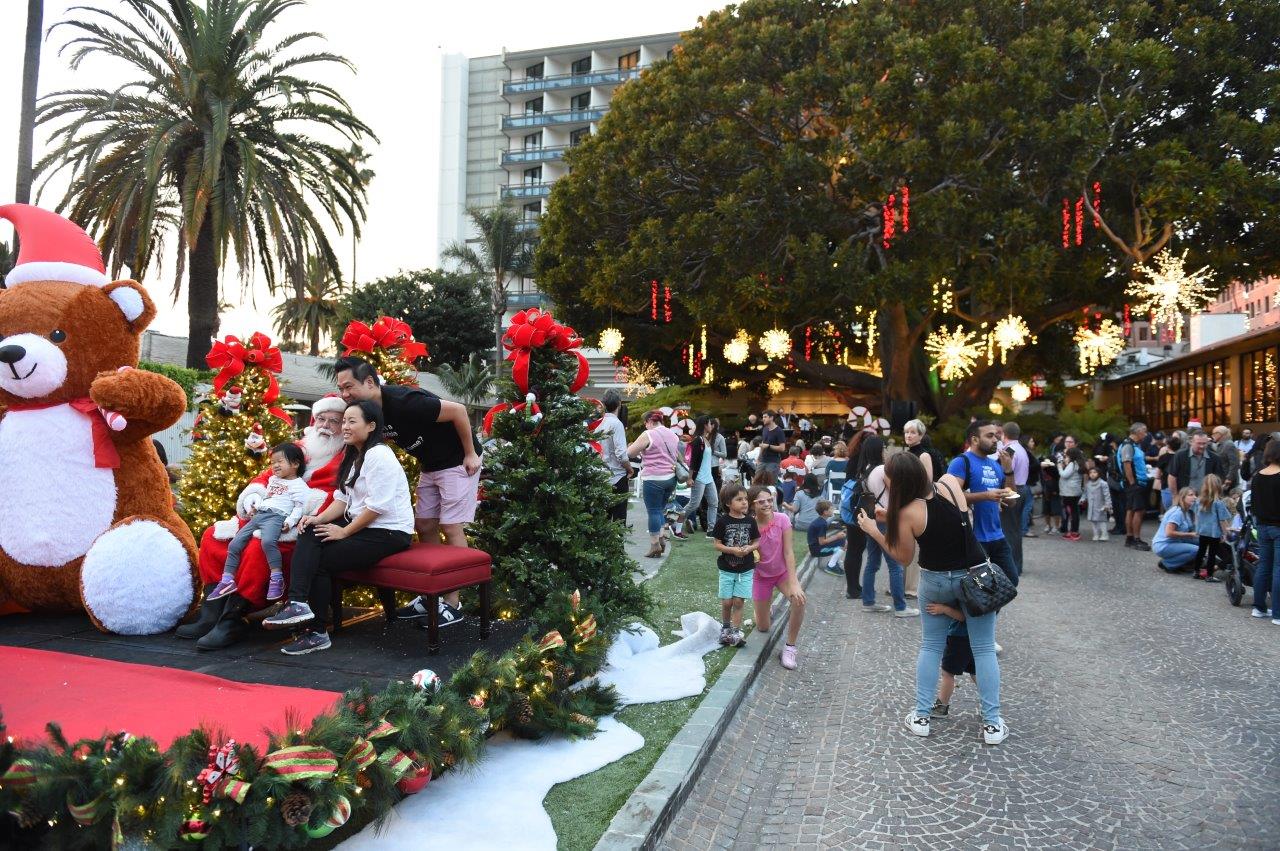 The holiday season in Santa Monica officially started this past Sunday,
December 10th at Meet Me Under the Fig Tree, a free annual community event hosted by Fairmont Miramar Hotel & Bungalows and MSD Capital.
Over one thousand Santa Monicans gathered under the historic Moreton Bay Fig Tree to celebrate the holiday season with live performances by Grammy award winning pianist Bill Cunliffe and the Santa Monica High School Orchestra, and vocalist Savi. The event was hosted by KTLA personalities Wendy Burch and Eric Spillman, while guests enjoyed playing in the snow, holiday cookie decorating, hair braiding by Glam & Go, a bounce house, a petting zoo, arts and crafts and a
whimsical ginger bread house display, as well as meet and greets with members of Santa Monica Police Department Mounted Police, Heal the Bay and the American Red Cross.

Once again, pictures with Santa Claus proved to be extremely popular, which parents can access on the Friends of the Miramar Facebook Page in the coming week. Guests were also treated to a complimentary raffle, which featured prizes donated by community partners including Arclight Theater, Fritto Misto, Healthy Spot, Exhale, Helen’s Bikes, King’s Seafood/Water Grill, FIG Restaurant and a one-night stay at the Fairmont Miramar Hotel & Bungalows. Guests delighted in culinary offerings such as grilled cheese sandwiches, chicken shawarma and
three types of hot chocolate from FIG Restaurant, and food from Santa Monica partners including Lunetta All Day, Bubba Gump Shrimp Co, Vanilla Bake Shop, Panini Kabob Grill and Crityk.

Attendees were asked to bring non-perishable food to be donated to The People Concern. In total, over 11,000 pounds of food was collected, all of which will be distributed to those families in the community most in need.

In addition to the food drive for The People Concern, Meet Me Under the Fig Tree was proud to be partnering with Santa Monica Police Activities League (PAL) to raise funds for their programs that benefits youth aged 6-17 in Santa Monica. Over $5,000 was raised for Santa Monica PAL from a silent auction of hotel room stays throughout California.

“I personally look forward each year to Meet Me Under the Fig Tree, which has turned into our largest community event of the year”, said Matthew Lehman, General Manager of the Fairmont Hotel & Bungalows. “This year we welcomed over 1,000 Santa Monicans.”

Ellis O’Connor of MSD Capital’s Hospitality Group added, “We are always impressed by the generosity of our community, with significant donations that benefit such worthwhile local charities.”

“We are humbled to once again to be part of this event that benefits our most vulnerable neighbors and gives the community in its entirety a reason to come together and celebrate,” said John Maceri, Executive Director of The People Concern. “Thousands of individuals and families will be directly helped by those who generously decided to give. Thank you to the Fairmont Miramar Hotel and
MSD Capital for hosting this annual Santa Monica holiday tradition.”

“We love being a part of Meet Me Under the Fig Tree and I could not be more impressed with the event this year,” said Eula Fritz, Director of Santa Monica PAL. “The Fairmont Miramar is such a big part of our community and they once again put on an amazing community event supporting important charitable organizations. We look forward to coming back next year.”

Santa Monica residents are invited for a staycation at the Fairmont Miramar Hotel and Bungalows during the month of December with discounted rates. To make a reservation, Santa Monica residents can dial 1-800-441-1414 and mention “The Fig Tree” for a discount. In addition, a portion of the room rates made under the program will be donated to Santa Monica PAL.