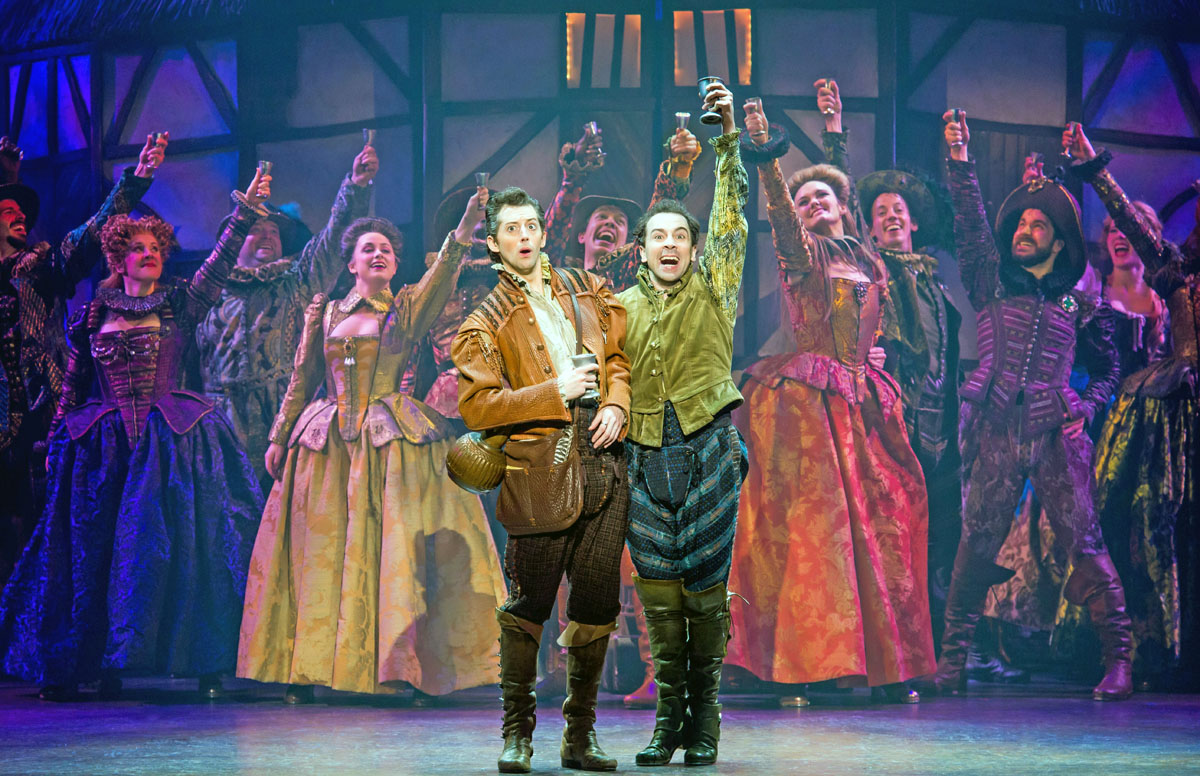 As you might imagine from the title – “Something Rotten!” – this is a rollicking, no-holds barred, irreverent two-act musical written by the brothers Kirkpatrick, Wayne and Karey, with the book by Karey Kirkpatrick and John O’Farrell, which is filled with irreverent wise cracks, double entendres, with no sacred subject escaping their sharp wit. This delicious confection, nominated for 10 Tony Awards, is brilliantly directed and choreographed by Casey Nicholaw. Thanks to the award-winning design team, you will be treated to a fairy tale set by Scott Pask, candy-colored costumes design by Gregg Barnes, with Jeff Croiter’s lighting drenching the stage in 21 flavors of sparkling colors. This production features three principal cast members from the Broadway production: Rob McClure as Nick Bottom, Josh Grisetti as Nigel Bottom, and Adam Pascal as Shakespeare.

The show kicks off with a rousing opening number, “Welcome to the Renaissance” belted out by Minstrel (Nick Rashad Burroughs) and an outstanding ensemble. The storyline revolves around the Bottom brothers – Nick, the more aggressive of the two, fabulously played by a multi-talented Rob McClure, and Nigel, more the poet and playwright, sweetly brought to life by Josh Grisetti. Their nemesis is Shakespeare, played by Adam Pascal, whose characterization is that of a rock star. Nigel can’t seem to come up with a play, while Shakespeare is spitting them out. In reading some of the Bard’s lines, Nick exclaims, “Who talks like this?” The brothers are under pressure and everything that Nigel writes seems to have a distinct Shakespearean bent. (Who’s stealing from whom?) Hence, another showstopper –“God, I Hate Shakespeare,” sung and danced by Nick, Nigel, and the cast. Not only is Nick under work pressure, he’s also under pressure from his wife Bea (Maggie Lakis) who wants to work outside the home, but Nick is fearful that everyone will think he’s a failure. Bea, a budding feminist, reminds him, “This is the ‘90s (1890s) and we’ve got a woman on the throne.” (Queen Victoria.)

Desperate, Nick goes to soothsayer, Thomas Nostradamus, played by a zany Blake Hammond, who tells him, “I’ve been closed for business due to unforeseen circumstances.” However, wanting to help this struggling theatre person, he goes through a comic trance ritual, hits his forehead a few times and sputters out words like “Cats,” “I see cats,” making hilarious references to other musicals such as “Westside Story and “Les Misérables.” He finally spits out the word “musical,” and encourages Nick to do a play that encompasses singing, dancing, and acting. This is unheard of in 1890s England but Nostradamus assures him that is the direction in which theatre is headed. In one final sputter, he utters the word “eggs” and hence the world’s first musical, “Omelette,” is born where upon their benefactor immediately backs out creating a financial challenge. So while Nigel is penning the text, Nick goes to see Shylock, (well, of course) played by Jeff Brooks. Financing is secured and rehearsals begin with “It’s Eggs!” – a hilarious production number performed by Nick and the ensemble. In the meantime, Shakespeare gets wind of something amiss and disguising himself as one of the actors, scoops up pages of scenes, offering to help by taking them home to critique. What would cross-referencing be without a character named Portia (Autumn Hurlbert.) She is the daughter of Brother Jeremiah, the slightly effete Puritan, ably played by Scott Cote. Portia is smitten with Nigel, which her father forbids. The Bard does a “Shakespeare in the park” number singing the rocking “Will Power,” reminiscent of The Who’s “Tommy.” You will also witness the transition of “Omelette” to “Hamlet” and will be entertained with 19 toe-tapping, spirited production numbers.

Other members of the technical production team are, Peter Hylenski (sound design),

I’m not giving too much away by saying, “All’s Well That Ends Well,” in this delightful romp through the Renaissance period, which will have you leaving the theatre with a big smile.