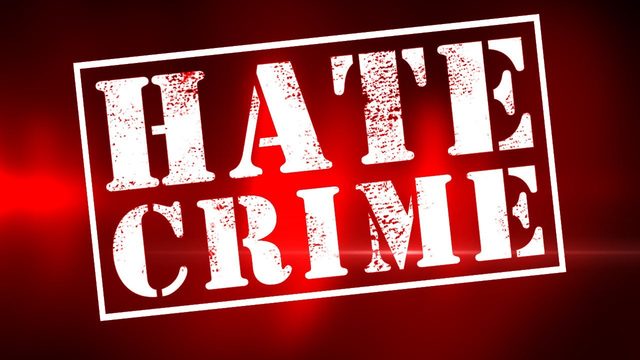 Hate crimes are on the rise in California and there are strong hints the increase stems in part from President Trump’s habit of using racial slurs like the “Pocahontas” tag he likes to apply to Massachusetts Democratic Sen. Elizabeth Warren and the travel bans he’s imposed on citizens of several Muslim countries.

There were also Trump’s call for a wall separating this country from Mexico and his claim that vast numbers of Latino illegal immigrants are criminals and rapists.

The latest FBI hate crime statistics cover only 2016, not even including an apparent rise in white supremacist activity that’s been reported less formally since Trump refused to outright condemn the neo-Nazi-tinged rally that turned fatal last summer in Charlottesville, VA.

Even the FBI’s numbers are far from complete, as they are based on reporting only from cities and counties that volunteer information. Many don’t bother reporting.

There is also no proof that Trump’s rhetoric and tweets caused the hate crime spike, but there is a definite correlation of the increases with his remarks.

Most striking in the California numbers stemming from 733 police and sheriff’s departments in all parts of the state is the rise of almost 100 hate crimes, or 11.7 percent, over the previous year, 2015. Perhaps even more important to anyone looking for a trend was a rise of 9 percent in the month of November 2016, the month of Trump’s election victory.

The numbers show increases in both race-based crimes and in those targeting gender. The biggest increases were in anti-Latino, anti-Arab, anti-Muslim and anti-LGBT crimes.

If there’s any parallel here to previous California hate crime spikes, it’s to the period just before and after Proposition 187 passed in 1994, seeking to deprive undocumented immigrants of all government services, from public schooling to emergency room care. The hot political rhetoric of that time also saw an upswing in crimes targeting Latinos, regardless of either their immigration status or of how long their families had been in California.

Most hate crimes, as usual, occurred in or near large cities, with most hate crimes in San Francisco against gays, while in Los Angeles a wave of incidents targeted Jews, Muslims and African-Americans.

Reported hate crimes linked to white supremacists in Los Angeles County jumped from 63 in 2015 to 105 last year, about two-thirds more than the previous year’s number. They have been most common in poorer communities like Cudahy, according to an annual survey by that county’s Human Relations commission.

That commission also found African Americans the most frequently targeted group in Southern California, often the victims of white supremacists. But the danger to transgender individuals also increased sharply, with 39 reported crimes hitting them compared with 22 the year before, a 77 percent increase.

The increases were just as sharp in Northern California, where hate crimes almost tripled in Santa Clara County, from 14 to 39, with San Jose hit the most. Of that city’s 24 reported hate crimes, 15 were based on race and ethnicity, seven were religious and two involved sexual orientation. San Jose’s total was triple its 2015 number.

The increases in crimes based on race and ethnicity, from swastikas on synagogues and mosques to physical attacks on gays, are too striking and too ubiquitous in California’s population centers to have been spurred by anything other than the not-quite-hateful, but still race-suggestive rhetoric that suffused television and the Internet at the times when these crimes increased the most.

It would be the height of naiveté to gloss over this reality. California learned in 1994 and 1995 that hateful political advertising coincided with a sharp rise in hate and hate crimes against the same or similar groups to those referenced in the ads.

The 2016 numbers – more dramatically increased than in any one year since the 1990s – appear to demonstrate that this type of politics is no more benign today than 20 years ago.

And until the numbers for 2017 come in sometime near the end of next year, no one will know the exact effect the Trump presidency has had on them. But it’s a safe bet we will see even more dramatic increases than last year’s.