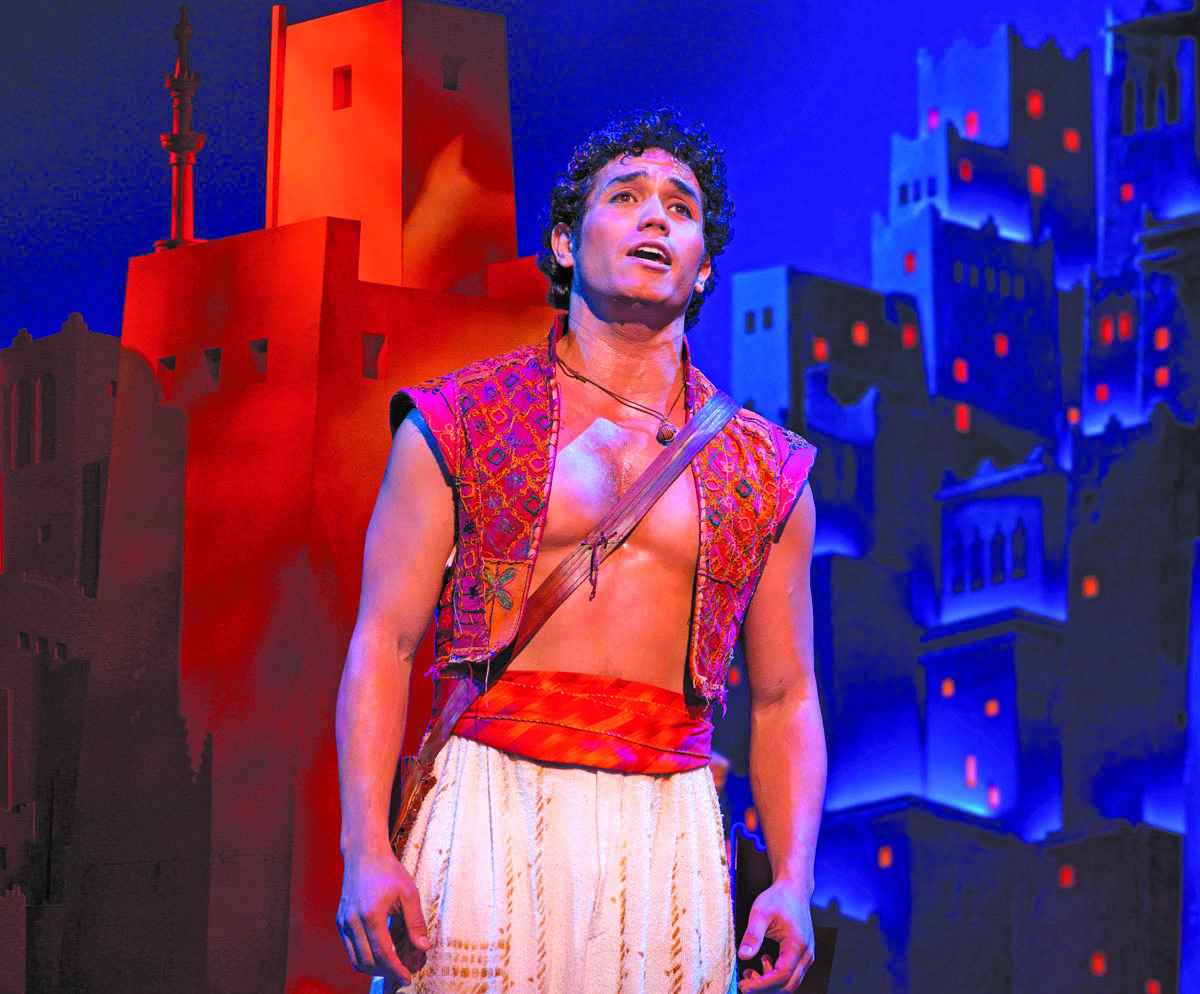 It is not a traditional way to begin a review, but adjectives to describe opening night of “Aladdin,” in its L.A. premiere at the iconic Pantages Theatre, kept flashing in my mind as I sat through the thoroughly amazing opening night performance. Words that came to mind include: Dazzling. Delightful. Exciting. Magnificent. Glittering. Radiant. Luminous. Astonishing. Wonderful. Spectacular. Awesome. Eye-Popping. Stunning. Wondrous. Mind-Boggling. Breathtaking. Glorious. Brilliant. Colorful. Glowing. Vibrant. Sparkling. This might give you an idea of what unfolded before the audience whose enthusiasm and approval matched the on-stage extravaganza.

The other non-traditional way to begin a review is with a “thank you” and once more I shall ignore tradition and first give shout-outs to the award-winning production team beginning with memorable Music by Alan Menken, Lyrics by Howard Ashman, Tim Rice and Chad Beguelin, Book by Chad Beguelin, the rainbow colored glittering Costumes by Gregg Barnes, Lighting Design by Natasha Katz, who saturated the stage with an artist’s palette of glittering lights, and Bob Crowley’s awesome Arabian Scenic and Sound Design. Tying all the elements together into one cohesive beautiful theatrical knot is Casey Nicholaw’s brilliant direction and exciting choreography under the guidance of dance captain Michael Callahan. With his highly professional, talented cast, the imaginative director gathered together all the elements creating one amazing giant iridescent bow.

Now to the story: The play opens with the Genie, played wonderfully by Michael James Scott, who originated the role in the Australian production. Breaking the fourth wall, he engaged the audience in his story telling with the evening kicking off with “Arabian Nights,” the first of 20* eye-popping ensemble and solo pieces with distinctly recognizable Arabian movements. We get to meet Aladdin, a waif of a boy played by a most talented Adam Jacobs who created the role on Broadway. Aladdin is a ne’er-do-well orphan who steals food for sustenance. Backed up by the gifted ensemble, he sings about his “criminal” activities in “One Jump Ahead.” He’s also a sensitive, loveable kind of a guy and desperately wants his deceased parents to be proud of him as he sings “Proud of Your Boy.” Aladdin hangs around with three partners in crime excellently played by Philippe Arroyo (Omar), Zachary Bencal (Babkak), and Mike Longo (Kassim). Now, where would a good story be without a couple of villains so enter the wicked Jafar, played wickedly by Jonathan Weir and his evil cohort, the very funny Reggie De Leon as Iago. Jafar is plotting the overthrow of the Sultan, well acted and sung by JC Montgomery.

Moving the story along, enter the beautiful, rebellious princess Jasmine played by Isabelle McCalla. She’s under pressure from her father, the Sultan, to find a husband to take care of her. Jasmine will have none of that and asks why she can’t take care of herself and run the castle after her father dies. (Big audience response to that idea!) Along with her three attendants (Mary Antonini, Olivia Donalson and Annie Wallace) she sings “These Palace Walls” and before you know it, she runs away into the streets and mingles with the people for the first time. Aladdin, not knowing that she’s the princess, becomes immediately smitten, as does she. They sing a lovely ballad “A Million Miles Away.” But alas, the Sultan’s henchmen track her down and drag her back to the palace. Meanwhile, the wicked Jafar is plotting how to find the magic lantern so he can make his wish to be the Sultan come true and coerces Aladdin to go into the forbidden cave to search for this magic lantern. Aladdin reluctantly enters the cave and in one of the most dazzling moments, what we saw made the audience gasp, and then break out in thunderous applause as the set design looks like solid gold walls, with sparkling jewelry and trinkets dripping from every crevice. Aladdin finds the magic lantern, accidentally rubs it and presto, the playful Genie appears informing him that he can grant three wishes. Infatuated with the princess, this street urchin decides to wish that he become a prince and presto so he does. In describing his princely outfit, along with the other costumes, ablaze in radiant sparkles, imagine midnight on New Year’s Eve with colorful balloons, confetti, and swirling colors, and that will give you an idea of what delicious eye candy unfolds on stage.

I’m not giving away the climax, but this is a fairytale, and like most fairytales, “Aladdin” offers up a delicious happy ending. The bad guys get their just rewards and the princess and the young “prince” receive her father’s blessings. This fabulous evening of theatre ends in the reprise of two of the rousing production numbers – “Arabian Nights” and “A Whole New World” following which the audience jumped to their collective feet displaying their approval with applauding, whistling, yelling and well-deserved lots of clapping.