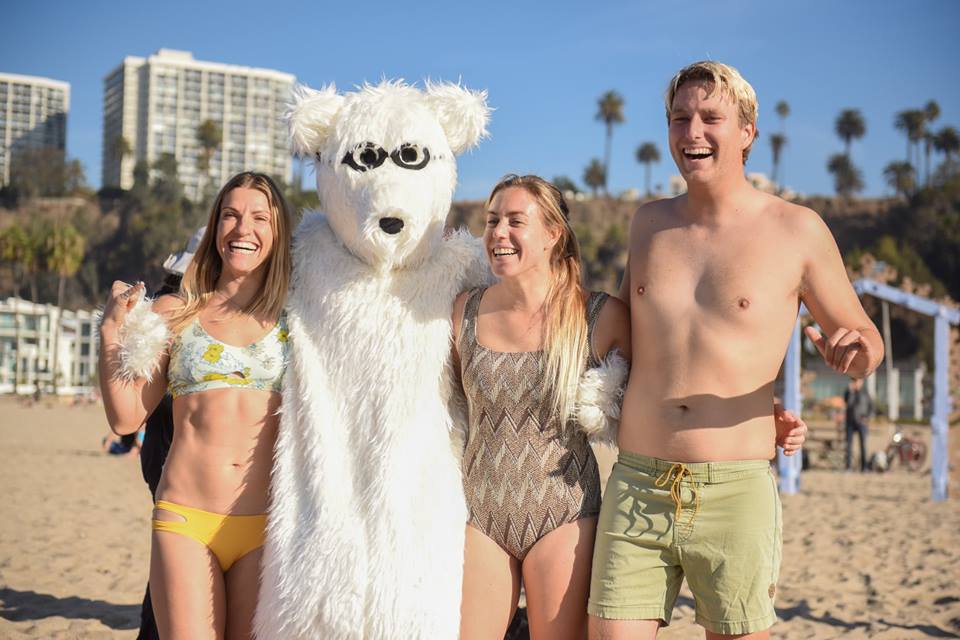 Annenberg Community Beach House hosted its first annual Polar Bear Swim, Saturday, December 30, during which groups of participating children and adults could either dip into the ocean – plenty cold at 9:30 in the morning – or participate in a buoy swim out into the sea and back around to the shore. Afterward, Beach House staff invited guests into its pool, heated to a much-warmer 91 degrees, and provided them with warm food and drink and activities, including games and photo ops with the event’s mascot, Pete the Polar Bear, who began the day out on the beach cheering on all of the swimmers.

Kim Burgueno, Aquatics Program Coordinator for Annenberg Beach House, explained that the event was intended both to boost the visibility of the Beach House as a public amenity and demonstrating that physically fit fun can be had not just in the traditional summer months, but in the cold of winter as well.

“We wanted to bring something to the community so they would remember the City of Santa Monica Community Beach House is a year round facility,” said Burgueno. “A lot of people don’t even know we’re here.”

In total, the event hosted about 145 participants, with 122 pre-registered, and an additional 20 to 25 showing up on the day of the event.

“They came out in full force,” said Burgueno. “Our youngest person is a year and seven months, and our oldest person participating is 77 years old.”

In addition to the Beach House staff, a team of L.A. County lifeguards stood watch both on the beach and in the water with a number of vehicles at the ready, led by Lifeguard Captain Remy Smith.

“It’s a great way to work with another department,” said Burgueno.

The Annenberg Community Beach House hosts events throughout the year. For a full list of what’s happening head to annenbergbeachhouse.com.