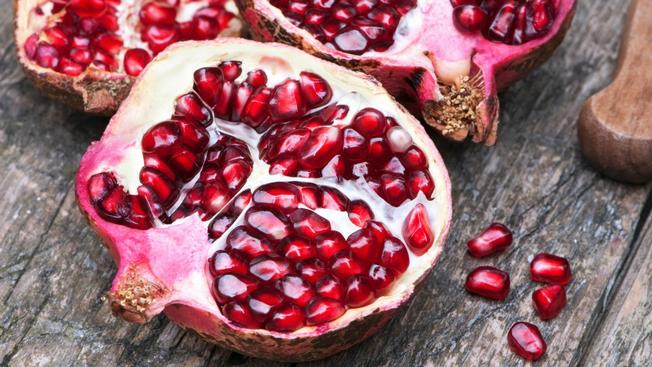 If ever a fruit looked like it just sprung wholly formed from a fanciful holiday painting or tapestry or tin, it’s the pomegranate.

Those wee seeds, often called jewels but more commonly known as arils, are so stupendously shiny and so incredibly crimson that a ruby placed in a pomegranate’s vicinity might understandably feel a touch competitive. And pomegranate arils rock that distinctive soft-crunch, but it is a small crunch, giving them a singular, stand-out, one-of-a-kind mouthfeel among all of the fruits.

And if you call upon Santa Monica Restaurant Week, which glitters as brightly as a ruby from Monday, Jan. 8 through Sunday, Jan. 14, you’ll know the pomegranate in a variety of dishes.

For once again, the health-minded eat-out event will feature an especially good-for-us foodstuff in the starring role. In 2018, that’s the pomegranate, and area restaurants will whip up an array of edibles that are laden with crunch-tastic, ruddy-and-bright fruit jewels.

That array includes a Bombay Bhel at Dhaba Cuisine of India, complete with “crisp garbanzo noodles” and other goodies, including pom seeds, while Dolcenero will go with a pomegranate sorbet.

Not every Restaurant Week around, and they are plentiful around the state come January, which is California Restaurant Month, takes on a specific theme. But Santa Monica long has, and it has always been about incorporating healthful foodstuffs into our meals.

The pomegranate nabbed the theme’s top spot for 2018, bringing with it jewel-sweet qualities to several local dishes, both of the entrée and dessert variety. To see more of what’ll be on the tables, pom-wise, and where, follow the pretty scent of pommy goodness to Santa Monica Restaurant Week.