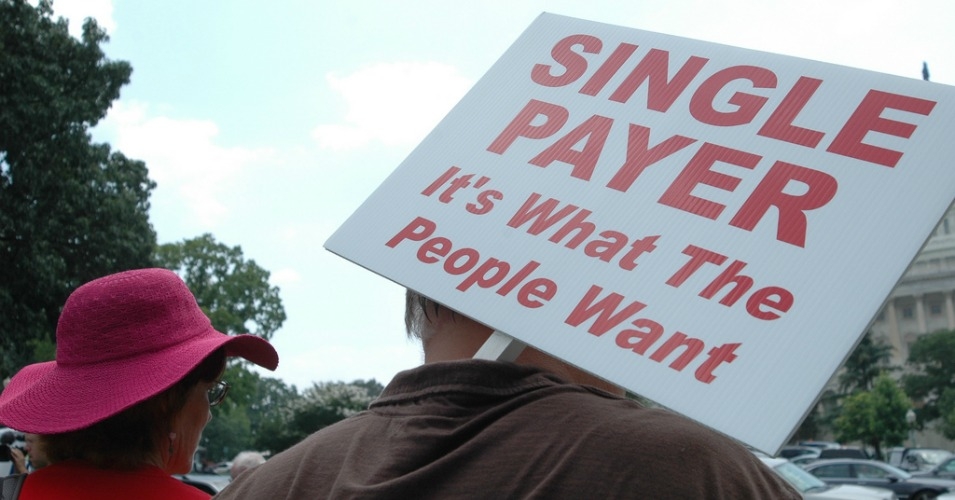 After the contentious, sometimes raucous first debate of this year’s primary election season, it became clear that issues like offshore oil drilling, affordable housing, President Trump’s tax changes, immigration and border control would likely not be the central themes of the campaign to succeed Jerry Brown as governor.

The Democrats who dominate California politics essentially agree on all those.

That left single-payer health care as the likely theme for contention. It’s an issue gaining prominence every day as Trump systematically hacks away at the Affordable Care Act (also known as either Obamacare or the ACA) and its links to Medicaid, known here as Medi-Cal.

The emphasis on single-payer is just fine with Lt. Gov. Gavin Newsom, the former San Francisco mayor and early frontrunner in this race.

Newsom may be best known for his pioneering 2004 order that saw his city begin issuing marriage licenses to same-sex couples, a practice that courts shut down months after it began but still set a pattern for the rest of America.

Yet, in an interview earlier in the campaign, Newsom made clear that while he thinks what he did for gay couples was a major achievement, he considers what he did with health care just as important.

“Same sex marriage was profound,” Newsom said. “We changed the whole trajectory of the debate on that. But I’m at least as proud of what we did providing universal health care in San Francisco. As the ACA is reduced, our plan will address people’s uncertainty. It makes San Francisco uniquely situated to weather the health care storm. These kinds of causes drive me. That’s why I’m running. Some things are bigger than politics. I consider health care a civil rights issue.”

So you can count Newsom, who had a lead of about 10 points over second-place Antonio Villaraigosa, the former Los Angeles mayor, as a supporter of the single-payer plan that’s knocked around in the state Legislature for the last decade.

The idea also gets support from candidate Delaine Eastin, the former state schools superintendent, while Villaraigosa and state Treasurer John Chiang, the fourth major Democrat in the running, like the general idea, but made clear in the mid-January debate that they want to see many details before backing any such plan.

Villaraigosa, 14 years older than Newsom, allowed that while he is “philosophically for it,” he also worries about seniors being suddenly switched off the proven national single-payer Medicare plan without knowing what a new system might look like. “You have to have a plan,” he chided Newsom.

The two Republicans in the debate, Orange County Assemblyman Travis Allen and John Cox, a San Diego County businessman, both were clear in opposing single-payer because of the large payroll taxes it would need to levy. San Francisco employers this year will pay $2.83 per hour worked for all employees earning below $97,000 per year.

Of course, Medicare depends heavily on payroll taxes, too, and most backers of a state single-payer plan suggest that Californians’ contributions to that system could be switched to a new state organization, which – like San Francisco – would also tax covered persons based on their incomes.

This roused an objection from Chiang, who asked “How much are you going to increase payroll taxes?…Are we going to make it difficult to do business in California?”

While Newsom did not get into specifics of the San Francisco plan during that debate, it’s clear his city’s single-payer plan has not chased away companies like Mozilla Firefox, Twitter and more, part of a long-running business boom mostly fueled by high-tech companies and their talented workforce, largely drawn from area universities like Stanford and UC Berkeley.

But Newsom did chide his rivals, saying California needs a governor who’s not afraid to act. He made the same point in the earlier interview. “I want to be known for looking around the corner,” he said. “I will not be timid. We need sustainable political thinking, not politics as usual.”

One thing that first debate made clear: On single-payer health and other issues, this year will not likely play out as politics as usual.