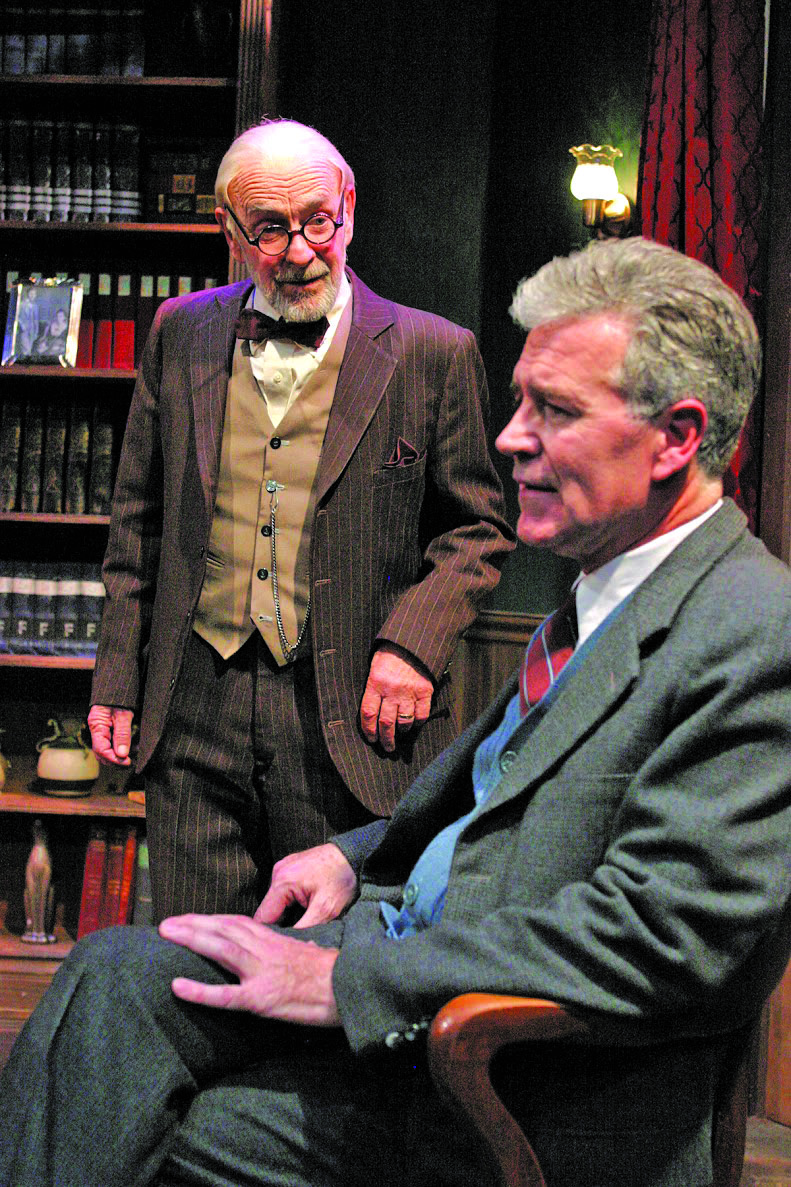 Most of us have been well indoctrinated that in the interest of harmonious social interaction, that it’s best to avoid bringing up the two most explosive

subjects – religion and politics – t he latter being the most polarizing subject we face today. That said, based on the book “The Question of God” by Dr. Armand M. Nicholi, Jr., about Dr. Sigmund Freud, the father of psychoanalysis, and C.S. Lewis, a British intellectual and staunch defender of Christian beliefs, Mark St. German wrote the intellectually stimulating “Freud’s Last Session,” now on stage at Ron Sossi’s iconic Odyssey Theatre Ensemble.

Briskly, but sensitively directed by Robert Mandel, what unfolds is a play on an imagined lively debate on the existence of God, as well as thoughts on sex, love, and the meaning of life between two brilliant men wonderfully portrayed by Martin Rayner as Sigmund Freud and Martyn Stanbridge as C.S. Lewis. The story takes place on September 3, 1939, the day Britain, joined France, Australia, and New Zealand in declaring war on Germany. The play begins in complete darkness as we hear radio announcements about an impending attack on London by Germany. When lights come up, we are in the study of Sigmund Freud, perfectly created by Scenic Designer Peter Hickok, who filled the room with the requisite couch, rows of books, a desk full of papers, photographs, vintage radio, and statues of gods and goddesses. It was so thorough you could almost smell the scent of pipe smoke.

Freud is waiting for a visitor, 40-year-old World War I veteran C.S. Lewis, a professor at Oxford University who has written books on the existence of God. An unseen dog barks as the professor rushes in, apologizing for being late, explaining that the trains were being filled with London’s students, patients from hospitals, and prison inmates to help protect them from the anticipated German bombing of the city. The witty Freud responds about Lewis’ tardiness with, “If I wasn’t 83, I would say it doesn’t matter.” Commenting on the dog, Freud quips that he uses his dog, “To gauge the emotionality of my patients.” It also becomes clear early in the play that Freud is quite ill and it is revealed that he is suffering from oral cancer, the manifestation of which is a deeply gurgling sound followed by coughing up blood, which for me was an appetite suppressant. Too graphic perhaps? Now professor Lewis has written a book in which he described Freud as a vain, ignorant man, basically desecrating him and, as you can imagine, still remaining respectful of each other, as they do throughout the play, there is an amusing discussion around those comments.

With some niceties dispensed with, these two brilliantly articulate men fill the next eighty minutes with a fascinating scholarly debate on the existence of God, touching on sex and love along the way. Reference is made to “Paradise Lost,” the epic poem in blank verse written by the 17th-century English poet John Milton, which is about the creation of Adam and Eve and how they lost their place in the Garden of Eden or as it’s also known, Paradise. Freud comments, “Satan is a beautiful creature and someone to blame everything on.” Other famous writers are invoked such as H.G. Wells, J.R.R. Tolkien, and G.K. Chesterton who Freud quips that, “He spoke badly of me so his intellect is questionable.” Throughout the discussions, no matter which pro-God quotes are invoked, Freud steadfastly contends that the concept of religion is ludicrous and the belief in God absurd. A radio broadcast interrupts their discussion. Prime Minister Neville Chamberlain talks about wanting an agreement between Britain and Hitler. Freud’s reaction: “History is full of monsters but somehow we survive.” They discuss morality. Lewis: “Moral conscience is something we are born with.” As you would expect in the presence of Freud, soon the discourse became more personal. He reveals that although he came from an Orthodox Jewish family, he was actually raised by a Catholic nanny. Lewis reveals that his mother died when he was nine and that he thought of his dad as a tyrant and Freud confesses that he despised his father. So, the banter continues and one comment by Lewis causes Freud to say with his dry sense of humor, “You might just have made a point. Your first.” To break up the constant flow of dialogue, the director incorporated off-stage action such as a siren warning of an imminent attack, a few phone calls from Freud’s daughter Anna, and a radio speech by King George VI declaring there will be no peace negotiations with Hitler.

It would be impossible to find fault with the riveting performances by these two highly skilled actors as well as the spot-on direction. What is missing is real dramatic conflict. The only very dramatic, albeit kind of stomach turning moment, is when Freud has a bad coughing attack. However, I appreciated the refreshingly clever dialogue and although we may have heard these arguments before, we may not have heard them couched so eloquently.

Whether you’re a believer in the existence of God, an agnostic, or a pragmatic scientist, your specific point of view will be touched upon in this spirited debate between two highly intelligent people, each of who is deeply entrenched in

his unwavering personal beliefs. However, even if it lacks the overriding dramatic conflict required to be a play, it is refreshing to hear the English language spoken in all of its eloquent splendor.

In saying goodbye to each other, Freud said, “May we meet again” to which Lewis replied: “God willing.” As a footnote, Freud took his life two weeks after England entered World War II, but his legacy is everlasting.

(Discounted tickets available for seniors, students and patrons under 30.)