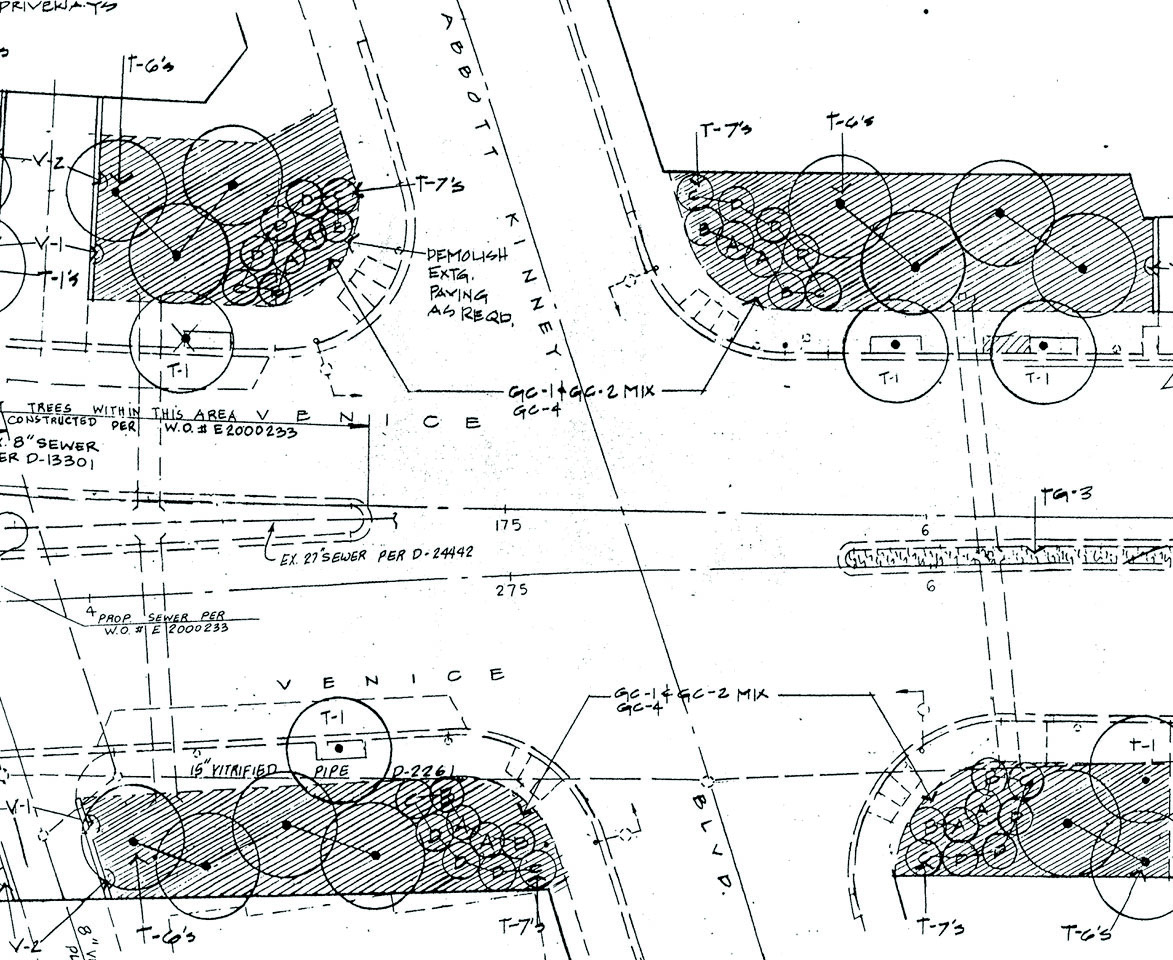 What started out as a plan to plant trees throughout Venice in 1995 has turned into a legal battle between local activists, a Hollywood producer, the City of Los Angeles, and the State of California.

Jerry Bruckheimer is known in Hollywood for producing films like “Pirates of the Caribbean” and “Top Gun”, and series like “CSI: Miami”, “CSI: New York,” and “The Amazing Race.” In Venice, he is known for owning the property on the northwest corner of Abbot Kinney and Venice Boulevard.

In 2015, shortly after Bruckheimer purchased the property, changes were made that pushed a private parking lot onto public property. In addition, an enclosure was built which interfered with City-planted trees. When Bruckheimer’s business partner, Martin Meeks of Venice Investors LLC, requested a new certificate of occupancy, the City asked that the changes made to the property be reversed.

Instead, a lawsuit was filed against the City, claiming that the City does not own the 5,000 square foot easement on the corner of Abbot Kinney and Venice. The land in question, it is argued, is being used by the City in a different way than was originally intended and that the deed and maps that the City is basing their claim off of are unreadable and vague. Therefore, Meeks is requesting the City grant a “reversion to acreage,” giving the land back to him and Bruckheimer.

“According to the applicant, in 1909 the original developer around the subject property conveyed to the City rights enabling it to create streets with easements. Those rights were not exercised,” a 2015 City Planning Report states. “The applicant is requesting a formal acknowledgment that the property in question is the applicant’s and that the City approve the minor improvements proposed for the area.”

In the early 1900s, what is now Venice Boulevard was part of a Pacific Electric Railroad route from Downtown to Malibu. This created many odd angles and spaces when the route was converted into a road. The 5,000 square foot bit of land on the corner of Abbot Kinney and Venice Boulevard, is one of these remnants and was given to the City to be used for future expansion of Venice Blvd. The property owner is arguing that because the City is not going to use the land for an expansion, ownership should revert to him.

Multiple City agencies have argued however, that because the nine palm trees on the land were planted as part of a 1995 landscaping grant from the State of California, the City does not have the authority to give away this land.

“The City’s action violates the provisions of the certified Land Use Plan (LUP) for Venice that relate to the visual enhancement of Venice Boulevard (the Ceremonial Gateway to Venice) and the surrounding area,” noted a Coastal Commission staff report on the property.

In 1995 James Murez, currently a member of the Venice Neighborhood Council, along with Andy Lipkis, founder of Tree People, received a grant from the State to landscape Venice. Part of their goal was to bring back the old luster and beauty of Venice. The intersection of Abbot Kinney and Venice was a central part of the plan.

“That intersection was supposed to be this crossing point between the commercial corridor of Venice and the beach traffic going west towards Venice Beach. That makes it a real ceremonial intersection,” Murez said. “This announcement was made by having nine palm trees on each of the four corners designating this is going to be the fulcrum point to get to the business district.”

Murez objects to the owners proposed changes to the property because he thinks they may take away from the visual enhancement these nine palm trees provide.

The concern over giving away the land is not all based on nostalgia; there is also a practical aspect. Last year Metro Transit Authority surveyed people who live and work in Venice to identify locations for future Metro Bike Share hubs. The northwest corner of Abbot Kinney and Venice where this easement located was one of the most popular choices.

“Abbot Kinney and Venice Boulevards hapen to be one of the most major cross terminal sites in the community for public transit,” Murez said. “It’s where all the buses congregate at the corners.”

If the case goes before a judge, the City believes they would win. Since the case is still pending, City officials are not allowed to comment, but a source close to the matter said that the City is 70-85 percent sure they will emerge victorious. However, because there is a chance of losing everything in court, the source told Mirror Media that a settlement is being pursued. This settlement, which would be voted on by City Council, would give the land back to Bruckheimer while leaving a small amount public for a Bike Share hub. Also, the palm trees would have to remain.

With 42 other similar easements throughout Venice, there is some concern that a City settlement could create a domino effect as other property owners try to reclaim land. The City winning in court would settle the matter once and for all. There is also concern that the proposed settlement could hurt the Venice community, since the City would not receive any money for the land.

“The City gets nothing in return. The piece of property is probably worth $5 million. The City doesn’t get that $5 million,” Murez said. “The City nor the community get any benefit out of Bruckheimer taking over this land.”

If there is a settlement, the Coastal Commission would still have to grant a Coastal Development Permit. On two previous occasions, the Commission has ruled that the City cannot give away the parcel of land.

“The proposed vacation will require Coastal Commission approval if the City Council approves it,” said Noaki Schwartz a Public Information Officer for the Coastal Commission. “There’s no telling how long that would take. Could be two months, but could also be much longer.”

The case goes back to court in March, 2018, and in the meantime members of the Venice community are being encouraged to provide input about what they want the City to do with this contentious corner. Councilmember Mike Bonin, will also have a say in the matter, so feedback can be directed to his office at 11thdistrict.com/contact-us.