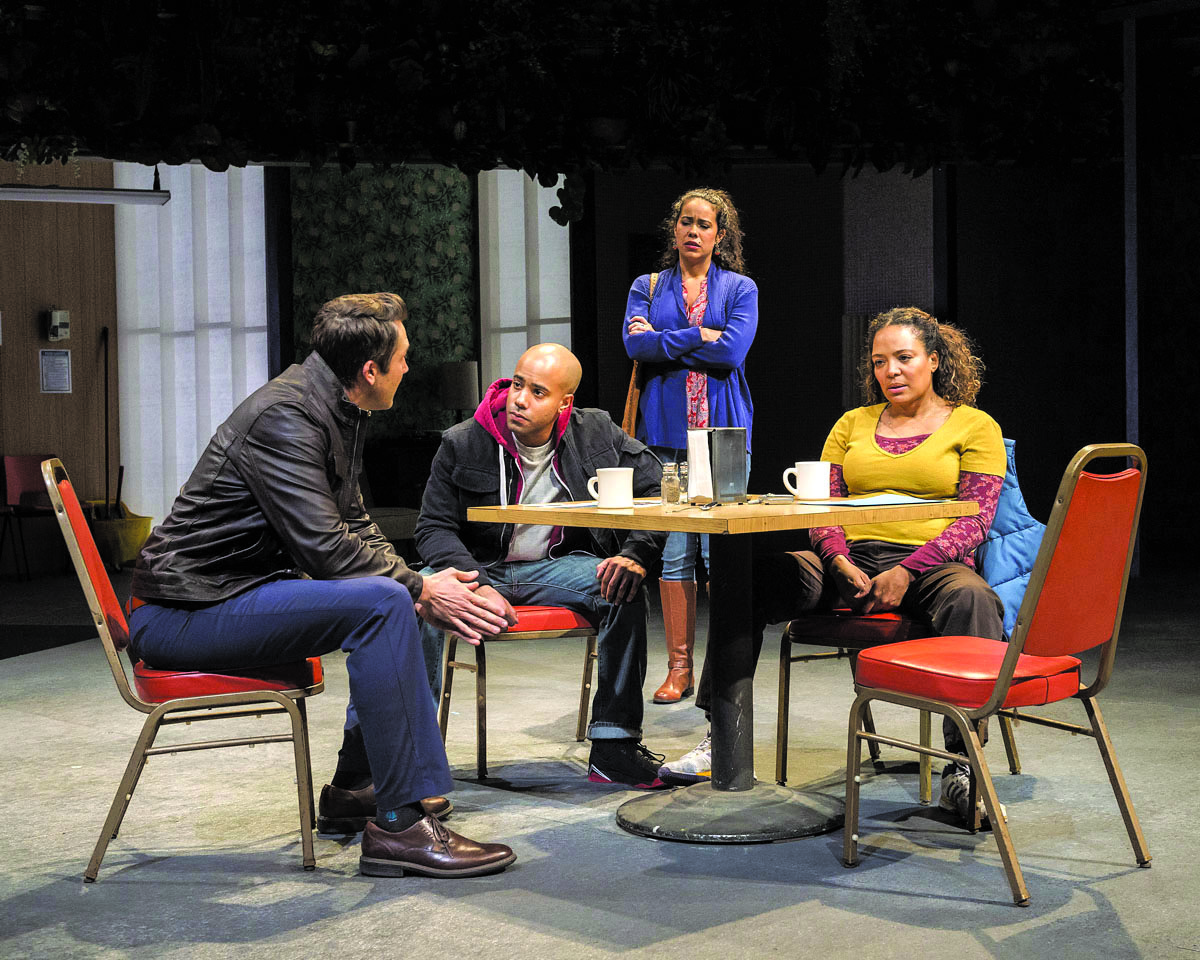 A funny thing happened on the way to the Mark Taper Forum to “Water by the Spoonful,” Quiara Alegria Hudes’ Pulitzer-prize winning play. Directed by Lileana Blain-Cruz, it began with lively opening dialogue between Elliot, (Sean Carvajal) a young Marine who served in Iraq and his cousin Yazmin (Keren Lugo). They lovingly make fun of their ailing Aunt Ginny’s strange way of cooking, describing how she combines healthy food with bad choices, such as bacon.

However, ten minutes into the play, the house lights came up followed by an announcement that the play would continue in five minutes, which turned out to be more like ten minutes. Having never experienced this before, I was quite curious as to what transpired backstage to cause such an unprecedented interruption. Without an explanation, the play resumed and I settled in with high expectations as I had just given rave reviews to the brilliant “Elliot, A Soldier’s Fugue,” the playwright’s first of the trilogy, with the third play, “The Happiest Song Plays Last” currently at the Los Angeles Theatre Center. Although unexpected, the interruption is not the problem.

To the story: Yazmin has a colleague at Swarthmore College who is making a film and wants to interview Elliot about his war experiences, but Professor Aman (Nick Massouh) soon finds out that he is an unwilling subject. He asks him what language he speaks to which Elliot replies, “Spanglish.” (That was the first stagecraft problem as Carvajal’s deep guttural Philadelphia accent made it quite difficult to understand his lines practically throughout the play). Yazmin is the one in the family who transcended her poor Philadelphia Puerto Rican roots to become an adjunct professor of music specializing in the dissonant jazz sound of John Coltrane. As in “Elliot, A Soldier’s Fugue,” the playwright’s knowledge gained from a Yale music degree is woven into the dialogue as Yazmin lectures her unseen class about jazz and Coltrane in particular. “This jazz great democratized the notes and gave ugliness a dignified freedom,” Adding, “This is jazz that some people listen to voluntarily.”

Odessa Ortiz, Elliot’s birth mother played by Luna Lauren Vélez, organized an online chat room for crack addicts seeking recovery. Her own addiction resulted in the death of one child and her sister Ginny raising Elliot. The participants use screen names to protect their identity. Her screen name is Haikumom and she begins the session with a non-alcoholic toast to the new day, “The roosters are crowing and it’s a beautiful day to be sober.” Orangutan, (a strident Sylvia Kwan) at 31 years of age is the youngest. She was adopted as a baby by an American family from Maine and now lives and works in Japan. She plans to search for her birth mother. Chutes&Ladders (Bernard K. Addison) is an amusing, supportive African-American IRS agent from San Diego who tries to act as the arbiter of truth. The last member to join the group is Fountainhead, (Josh Braaten) a recently unemployed techie from Philadelphia struggling with both the acceptance and control of his addiction.

Elliot had to overcome his own addiction to pain meds on which he got hooked when he was being treated for a severe leg wound. He is also suffering from PTSD and is “stalked” by the ghost of an Iraqi that he killed. The specter appears throughout the play adding to Elliot’s struggle with adjusting to life as a civilian where he’s working at a fast-food restaurant. It is there that he receives a phone call from Yazmin that his beloved Aunt Ginny has been taken off life support. He was very devoted to her and is overwrought at the news. He and Yazmin will be responsible for making the funeral arrangements. The backbone of the family, she wished to be cremated and her ashes scattered in Puerto Rico. Neither one has money for the funeral so they visit Odessa to see if she can help which triggers some of Elliot’s pent up anger towards her. She doesn’t have much but offers them her computer to sell.

Back online, Orangutan is checking in with the group from Japan: “I flew half way around the world but it was still me when I got off the plane.” She has 96 days of sobriety but is lonely and wants Chutes&Ladders to join her. He tries to discourage her and covers his insecurities by saying, “I’m 50 years old on a good day” adding “I’ll admit I’m a dashing concept.” Teasing him about being rigid, she says, “I bet you were the kid who colored inside the lines.” “No” he replied. “I was the kid who ate the crayons.” Fountainhead is now online. He is unsuccessful at controlling his addiction and confesses that he had a slip and smoked crack in his car. In Act II, Elliot and Yazmin are trying to select flowers for the funeral and when carnations are suggested he says, “You know what a carnation says to the world?” “That they were out of roses at the 7-Eleven.” Moving the drama along, an unexpected action is taken by Odessa, something transpires between Orangutan and Chutes&Ladders, and the centerpiece of the family gets her last wish fulfilled.

Regarding production values, they were adequate and consisted of a creative set design by Adam Rigg, costume design by Raquel Barreto, lighting design by Yi Zhao, sound design by Jane Shaw, and projection design by Hannah Wasileski, who came up with fascinating visuals.

So, what went wrong with this production? This is a highly acclaimed play that received rave reviews and it’s clear that in theatre vernacular, “the words are on the page.” However, the director, Lileana Blain-Cruz was not able to serve the script or the actors well, as one could not help thinking throughout the play that the acting at times amounted to line readings and had a rather high-schoolish feel, rather than a professional ensemble. That said, two excellent performances were given by Luna Lauren Vélez and Keren Lugo, both of whom dug deeply into their characters, delivering fully realized characterizations. Some of the other actors would probably be fine for film or television but lacked good vocal training or the stagecraft necessary for theatre. As for Hudes’ writing, it is spot on in illuminating in both a heartfelt and sometimes amusing fashion, the debilitating consequences of addiction on the individual and on families as well as the emotional residue suffered by veterans who experienced the horrors of combat.