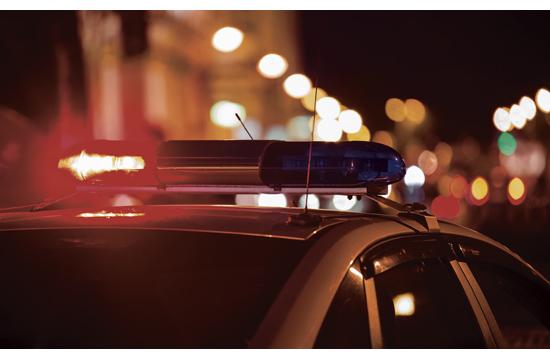 On Wednesday, March 14, at 7:14 p.m. officers of the Santa Monica Police Department received a call for service at the 900 block of Pico Boulevard in regard to a battery that had just happened. As the officers were en route to the scene they were told by dispatch that the suspect had last been seen walking westbound on Pico Boulevard. The officers, armed with a description of the suspect, spotted their man near the intersection of Sixth Street and Pico Boulevard. The officers detained this individual. The officers learned the victim was walking her dog eastbound on Pico Boulevard as the suspect was walking from the west. As they approached each other, and for unknown reasons and completely unprovoked, the suspect kicked the victim in the leg above her knee. The victim had followed the suspect and summoned the assistance of the police by way of her cell phone. The victim was desirous of a prosecution, and even though she appeared to be suffering from swelling and pain to her leg, she refused medical treatment. The officers arrested the suspect, aged 37 and from Los Angeles and he was later charged with battery. Bail was set at $20,000.

On Thursday, March 15, at 6:27 a.m. officers of the Santa Monica Police Department responded to a radio call informing them that a man had been threatening a maintenance worker at the Santa Monica Place Mall. The officers learned that the maintenance worker had been cleaning an area outside of his office that was located in the parking structure area of the facility when he spotted a man taking empty cans out of numerous trash bins. The maintenance worker told this man that he was not allowed to do this and that he needed to leave the parking structure. The man responded by becoming irate and abusive and then pulled a knife out of his pocket and told the maintenance worker that he was going to be stabbed. The maintenance worker retrieved a broomstick that he had at hand and as the suspect approached him waved the broomstick at him while telling him that the police were on their way. The suspect fled the scene at that news. The officers went in search of the suspect and discovered him in the area of Ocean Avenue and Colorado Boulevard whereupon they immediately arrested this 34-year-old homeless man and he was later charged with assault with a deadly weapon. Bail was set at $30,000.

He Made His Mark.

On Thursday, March 15, at 10:55 a.m. officers of the Santa Monica Police Department received a radio call informing them that a possibly intoxicated man was loitering around an apartment building located in the 800 block of Lincoln Boulevard. The officers hastened to the scene and spotted the suspect lying completely naked on the grass in the atrium of the complex. The officers spoke with the manager of the complex who told them that this man did not reside at any of the apartments there and that he had entered the complex earlier, wandered aimlessly around the atrium, taken of his clothes and then used a permanent marker to scrawl strange markings on several of the lanterns in the complex. The officers arrested the suspect and this 37-year-old homeless man was later charged with vandalism. Bail was set at $1,000.

She Stopped For Gas.

On Thursday, March 15, at 4:30 p.m. officers of the Santa Monica Police Department received a report of a “woman acting strangely and appearing to have a seizure” in the 1900 block of Wilshire Boulevard. The officers rushed to the location and spotted the woman. The officers approached this woman and as they did so they noticed that she was vigorously inhaling gas from a compressed gas duster containing nitrous oxide. The woman was doing this in order to have some kind of gas induced euphoric experience. The woman appeared to be in a precarious situation health wise as a result of her inhalations so the officers summoned the assistance of Santa Monica Fire Department Paramedics. After the woman had been treated by the paramedics the officers arrested this 24-year-old Santa Monica resident and she was charged with possession of nitrous oxide with an intent to inhale. She was later released after being issued with a citation.