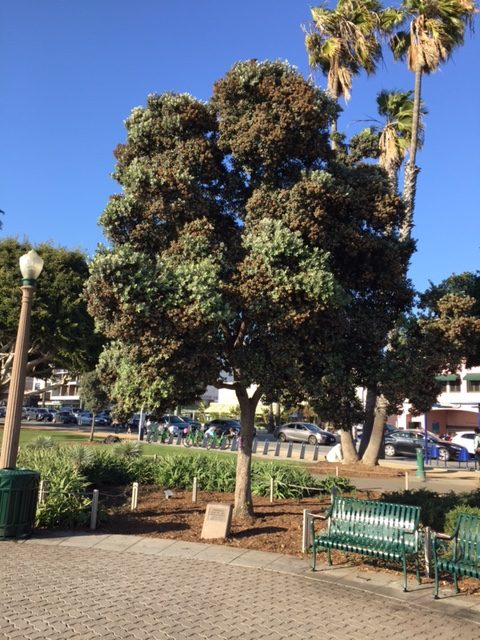 On Earth Day- Sunday, April 22 this year- the Children’s Tree of Life will be publicly rededicated marking the 35th anniversary of the peace tree’s planting on Earth Day, April 22, 1983 at a public peace gathering in Santa Monica’s Palisades Park.
The New Zealand Christmas Tree, which was recently designated as one of the first 5 trees in Santa Monica’s new Heritage Tree Program, will be the site of the family-friendly Earth Day gathering.
The tree is located  in the Palisades Park at Ocean Ave. and Colorado, just north of the gateway to the Santa Monica Pier.
The free-to-the-public event will take place from 3:00pm until 4:00pm
In 1984, Santa Monica’s late Mayor Ken Edwards, in a City Council Resolution, proclaimed the tree “a living monument to world peace”.
Numerous peace and environmental events have taken place at the tree. In fact, Santa Monica residents Jerry and Marissa Rubin, who planted the tree, were also married there at their ‘Public Peace Rally Wedding’ on June 12, 1983.
The Rubin’s will host the event that will include songs, poetry, guest speakers and a highlighted ‘35th Anniversary Rededication Ceremony’.
For further information, call 310-399-1000, email JerryPeaceActivistRubin@earthlink.net, or visit facebook.com/TreeHuggingFriends.
By admin March 22, 2018
Tags: 35th, April 22, Children's, Day, Earth, Held, Life, Palisades, Park, Public, Rededication, santa monica, Tree in News
Related Posts