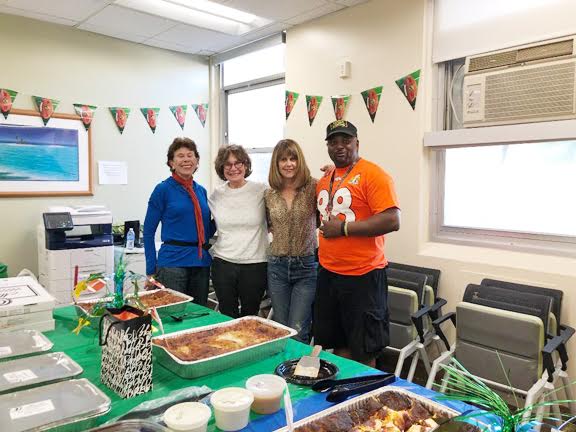 Indulge me while I take the time to look back to February and to tell you about this year’s Super Bowl Sunday 2018.

Welcome Center at the VA Campus: This was our third year and it was ‘the charm’. Corey Morris was there early getting the word out on campus and taking pictures. We served approximately 75-100 meals to Veterans. It was a mix of homeless, temporarily housed, and permanently housed Veterans with some Vets from campus dropping in to attend the event. Staff was welcomed and they were a big part of the day as well. This is where words fail, as it is so hard to describe the questioning approach some Veterans had to entering the building to ask if the party and free food was really there and were they indeed actually welcome to come in.

Huge and special thanks to Village for Vet’s Jeff Vernon and Pam Dawber. Pam brought the decorations, came early to set up the room along with Michelle from the Welcome Center so the room looked fun and festive. Pam also arranged for specially prepared lasagnas to be donated from Vincenti no less. Maureen Vincenti generously made three huge trays for us including one incredible vegetarian version. Maria’s Italian Kitchen delivered the rest of the hot meal which included trays of Chicken Marsala salad and bread.

But the real surprise of the day was supplied by Pam Dawber who brought 10 Coats that turn into sleeping bags. Carrie Gray, who runs the Welcome Center and who brought her two darling boys to volunteer with mom at the party, suggested we raffle the coats. As we were preparing to do that, a man approached us. He became fixated. He could not take his eyes off the coat. He gently asked if he could have one. As he and I got busy examining the coat and learning together how to assemble and disassemble it, the staff got busy checking his name in the system which indicated that indeed he had been noted and counted in the Homeless tally just a few weeks before. When they said “Yes, you can give him the coat” he took it from us with reverence. As a result we nixed the raffle. Carrie and staff at the WC will be giving the remaining coats out as Homeless Vets qualify.

If you want to see something special, look at the 90 second video of the party which is posted on our website and on our new YouTube channel. There are not many faces here as the VA requests to show faces only with written permission.

A note about the coats: Pam’s friend makes them in Detroit. I’m hoping we can create a program for them.  This is the letter I got from volunteer Marisa Miller the next day:

“…what you are doing for the vets is so special. Seeing their smiles and how happy they were to have such a wonderful meal brought them so much happiness. I have been thinking lately of how important it is to live a “purposeful life”. Today I felt that I was doing something “purposeful” and it sure felt good.