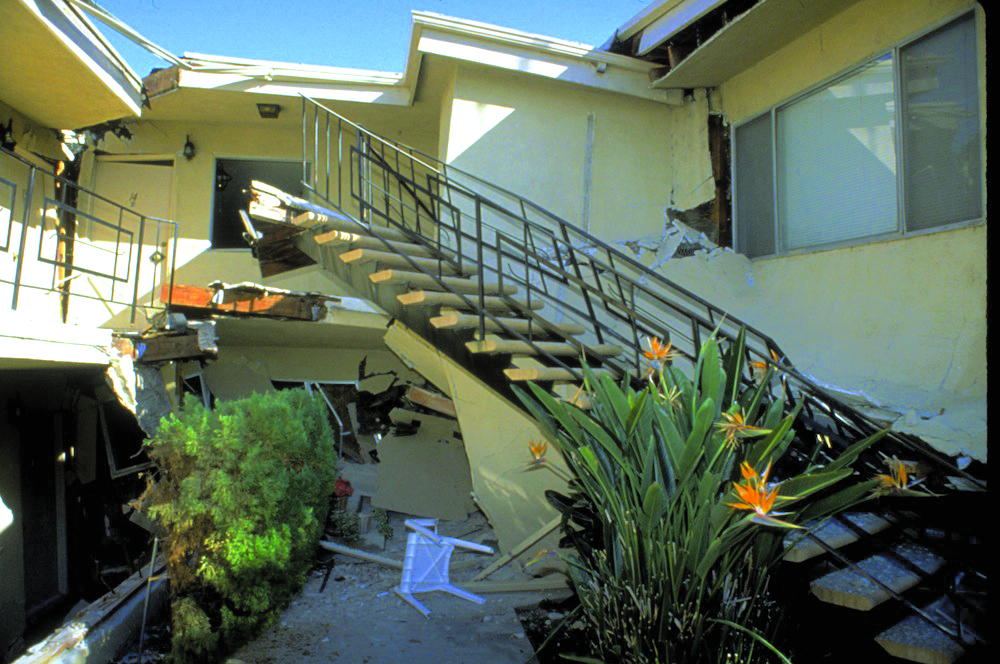 Earthquake repairs, upgrades, and city safety: Everyone experienced it differently. For this writer, lying in bed in the dark in the predawn hours of a Sunday in January, 1994, it was a sudden locomotive shaking the apartment like a mechanical paint stirrer, pictures falling off the walls and books off the shelves. The Northridge quake.

The damage spread throughout Santa Monica. St. John’s hospital was irredeemably wrecked. Homes fell off their foundations along Montana Avenue. Apartment buildings everywhere were damaged, with over 1,600 apartments affected. Champagne Towers, on Ocean Avenue had to be evacuated and St. Monica’s tower was cracked through. The Police Department, abandoning its headquarters, had to operate out of a temporary command post: a 20-year-old motor home that had been seized in a raid.

After the quake, the City compiled an extensive list of vulnerable buildings, and started a campaign to get them reinforced – or demolished. That effort resulted in repairs to many buildings throughout the city, but many remained untouched.

Jump forward 19 years, to 2013. An article in the Los Angeles Times revealed that over the years the City’s effort had faded and was forgotten. Many buildings that should have been repaired or reinforced were left exposed to the chance of catastrophic damage in a future quake. The list of vulnerable buildings that the City had painstakingly assembled was, in fact, lost. The LA Times article quoted the then-building officer: “I would not say lost, but misplaced…At this time I can’t locate it.” And even though owners of many damaged buildings reinforced them after the earthquake, the city’s records of those projects are incomplete – many of the permit records were lost as well.

After the article was published, the City swung into action, funded a new study and eventually assembled a new list of vulnerable buildings. A year ago Santa Monica City Council passed a new law ordering structural reviews of buildings on the list, and repairs where necessary. Notices were mailed to owners, and the retrofit program began. The program includes more than a thousand two- and three-story apartment buildings with parking on the ground floor. Many of these are known as “dingbats,” with first-floor parking accessible from alleys behind the buildings.

Many of these buildings have been in their owners’ hands for many decades, and house thousands of rent-controlled tenants. Hundreds of these buildings are “mom-and-pop” properties and are the sole, or main, source of income for many of their owners who are now retired. More often than not, these people have little experience navigating the City’s complicated permit rules, and even less knowledge of how to find, and deal with, engineers, architects and other consultants they may need.

To help owners and renters with this process, the City has published comprehensive information on the internet. Two of these pages are:

Owners who have received notices from the City, and renters wanting information about their rights can visit these pages and get information relevant to their particular case.

Here’s an important point. The City’s new list of vulnerable buildings is based on a “windshield survey” conducted by the City. This means that City inspectors traveled throughout Santa Monica and pinpointed buildings that appeared, from the outside, to be vulnerable. Many of these buildings were actually repaired and reinforced in the years after the quake, even though those repairs may be invisible from the outside. But since many of the City’s building permit records were lost, are incomplete or simply unavailable, it is now the responsibility of those owners who received notices to let the city know about repairs that were performed at the time.

For owners who received notices, the first step should be a visit to the web sites mentioned above. Owners who completed repair work after the earthquake and had it approved by the city can assemble any documents they may have from that work, and bring it to the Building and Safety Division at City Hall, first floor, at 1685 Main St. The person at the counter will provide the required forms, and take in the materials for further processing. Owners of buildings that have not yet been reinforced should also visit the Building and Safety Division, where they will find a wealth of information about how to proceed with the work, including information about finding structural engineers to inspect the buildings and design the repairs.