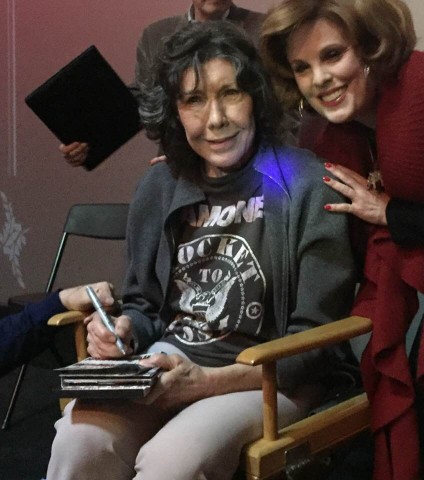 The 41st anniversary of Robert Benton’s “The Late Show” was a smash hit recently at Laemmle’s Ahrya in Beverly Hills. On hand for the festivities was the film’s leading lady, comedy queen Lily Tomlin, a super youthful Bill Macy age 95 (!) and the forever vivacious Joanna Cassidy who joined Anniversary Classics Series Moderator Steven Farber for a lively Q & A after the screening. The trio shared warm memories of the movie’s leading man Art Carney and the film’s producer Robert Altman. Also in attendance were co-star Eugene Roche’s family members and Bill Macy’s lovely actress author wife Samantha Harper Macy. Lily’s pal actress Kat Kramer was helpful in lining of the panel and was in attendance with mom Karen Sharpe Kramer. The series has included two of Kat’s father Stanley Kramer’s award winning films, Guess Who’s Coming to Dinner and Judgement at Nuremberg and will host the 55th anniversary screening of his all-star comedy hit “It’s A Mad Mad Mad Mad World” later this year – something to look forward to… as Billy Crystal once quipped “this movie stars a village”!

The opening night of the west coast premiere of “The L.A. Diner” took place Saturday night at the Beverly Hills Playhouse on Robertson. The intriguing character driven piece is based on actual events and people and is well directed by Sam Ranganath and set in 1962 at a diner outside 20th Century Fox Studios where Marilyn Monroe is at work on her last ill-0fated incomplete film “Something’s Gotta Give” which was being directed by George Cukor. The cast is excellent and stars Cathy Washburn, Caroline Dunaway, Samuel Neagley, Tuluv Price Seth Wayne, Dina Cataldi, Phil Adkins and Anthony DePage. Caroline Dunaway plays my late frien dEvelyn Moriarty “Evie” who was MM’s stand in on her last three movies and is terrific. The compelling story written by Ed Mills and Jeremy Palmer presents a very dignified and respectful view of the late troubled star and is a must see for MM fans and classic Hollywood lovers. It’s only here for a limited two week run so catch it while you can or tune in for a live streaming this Saturday night on the web – visit www.theladiner.com for info.

A few other plays worth catching are fun polar opposites…the daring, hip, edgy and irreverent dark comedy The Tragedy written by D.G. Watson and well directed by Ahmed Best is presented by Ammunition Theatre Company and plays once a month at The Pico Playhouse. The funny uplifitng family friendly wholesome crowd pleaser musical “Sister Act” well directed by Ben Lupejkis and presented by Kentwood Players at The Westchester Playhouse plays until April 12th. In The Tragedy willful young drug induced millennials stoop to any level to get what they want… watch out! In “Sister Act” Deloris Van Cartier well played by sassy super singer/funny lady Maya Veronique Perez must hide out in a convent to hide from mobsters. Patricia Butler’s singing Mother Superior is also a stand out – visit www.kentwoodplayers.org for more info about this fun and very entertaining show filled with lots of talent and fine singing voices. The next performance date for “The Tragedy” is April 19 – get your tickets soon for this entertaining and shocking audience favorite as the show I attended was SRO. The Tragedy stars the talented Malcolm Barrett, Tina Huang, Brandon Scott, Julie Bersani, Garrett Mercer, Roland Ruiz, Kim Hamilton, Jason Ryan Lovett and Claudia Doumit – visit www.ammotheatre.com for more info.

Also of note – congratulations to veteran film actress Marsha Hunt and veteran screenwriter Norma Barzman who were recently honored at The Writer’s Guild Awards held at The Beverly Hilton. The two talented ladies were erroneously blacklisted decades ago during the McCarthy witch hunts. Marsha Hunt recently celebrated her Centennial and I’m looking forward to seeing the documentary about her life called “Marsha Hunt’s Sweet Adversity” directed by Roger C. Memos – I hear it is excellent and has won several awards on the film festival circuit. The film’s producers are aiming for a run at Laemmle’s on the Westside soon.