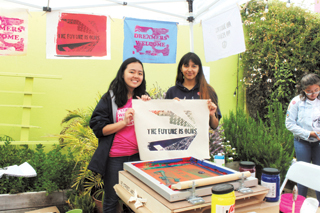 Artist-in-residence, Asia Sztencel held an interactive workshop called, “Welcome to my Pico” in which participants used fabric paint on white reusable bags that she designed.

“I collaborated with six different businesses, and each of them put a piece of my art inside of the business. I’m inviting everyone to go on the art hunt,” Sztencel said. Printed on the bags were maps of the neighborhood. Sztencel added that the participating businesses “have been [in Santa Monica] for 20, 40 years.”

On the main stage, live performances entertained a roaming crowd that walked between galleries, merchants, food trucks and activity tables. The SMC Jazz Vocal Ensemble, the Hype Squad (with Ebonica Fischer) as well as Pico Youth and Family Center MCs shared the stage throughout the afternoon. Jourdan Harris, emcee “Juan”, stated that his lyricism is “a way of expression,” and added, “it gives me a voice; what I say matters.” The young performer attended John Adams Middle School, graduated from Santa Monica High School; and is currently studying music at Santa Monica College.

Inside the Highways Gallery, a young pianist, Julian Cuevas played on an open piano. He stated that he started in June of 2017. Groups of people stopped to listen while walking between galleries. Across from the Highways Gallery, Post Mango opened their doors to exhibit the visual effects that they produce; next door, the Art Reality Studio with Keith Tolch attracted youth and adults for a virtual reality experience. At the entrance of the art center, Mariángeles Soto-Días led a screen printing workshop with several teens.

Sue Bell Yank, Director of Communications & Outreach for the 18th Street Arts, stated, “we’re excited to bring [young] artists and cultural workers together with our professional artists, the combination of these people in the space goes to the core of our mission, that ‘art making is part of a vibrant and healthy community.