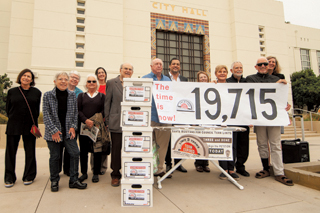 With resident rumblings centering on the efficacy of Santa Monica City and its Councilmembers in recent months, a bold move to shake up the voting system and limit sitting terms saw almost 20 thousand petition votes lodged at Santa Monica City Hall Monday morning, May 21.

According to the driving force behind the possible charter amendment, Mary Marlow, “The catalyst for the petition was the power of incumbency and the financial support from special interests keeping incumbents in power.”

If passed at the ballot box, the initiative would see a Charter Amendment prohibiting a person from serving on Santa Monica City Council for more than three terms; a lifetime limit of no more than 12 years.

There are currently no term limits on sitting councilmembers in Santa Monica, effectively enabling an individual to serve on City Council for decades.

“In the last 25 years, only two Council incumbents have lost an election,” according to Marlow. “Two incumbents died in office and were replaced by appointees, who became incumbents at the next election.”

The collected signatures should be enough to see the initiative on next election’s ballot.

“It is time for Santa Monica residents to have their chance to be heard at City Hall,” said campaign volunteer coordinator Elizabeth Van Denburgh.

Santa Monica City Councilmember Sue Himmelrich attended the signature drop off and is in support of the initiative. “I ask my colleagues to act swiftly to put this initiative on the November ballot and let Santa Monica vote,” Himmelrich said. “Regardless of how you feel about term limits, our residents have a right to be heard on this issue at the ballot box.”

According to Marlow, City Council incumbents seldom lose elections because of the power of incumbency, “which includes significant financial support from outside Political Action Committees (PACs) that is unavailable to most challengers. Contributions from PACs are unlimited (citizens United).”

As a Charter Amendment, the initiative must be signed by fifteen percent (15 percent) of the City’s registered voters, or approximately 10,500 voters. The Los Angeles County Registrar Recorder will be asked to verify the signatures within 30 days. Once verification of signatures is certified, the Registrar reports to the City Council, that is required to place the proposed ballot measure on the November 6 ballot at their next meeting.

For more information on the initiative head to: www.santamonicatransparency.org.