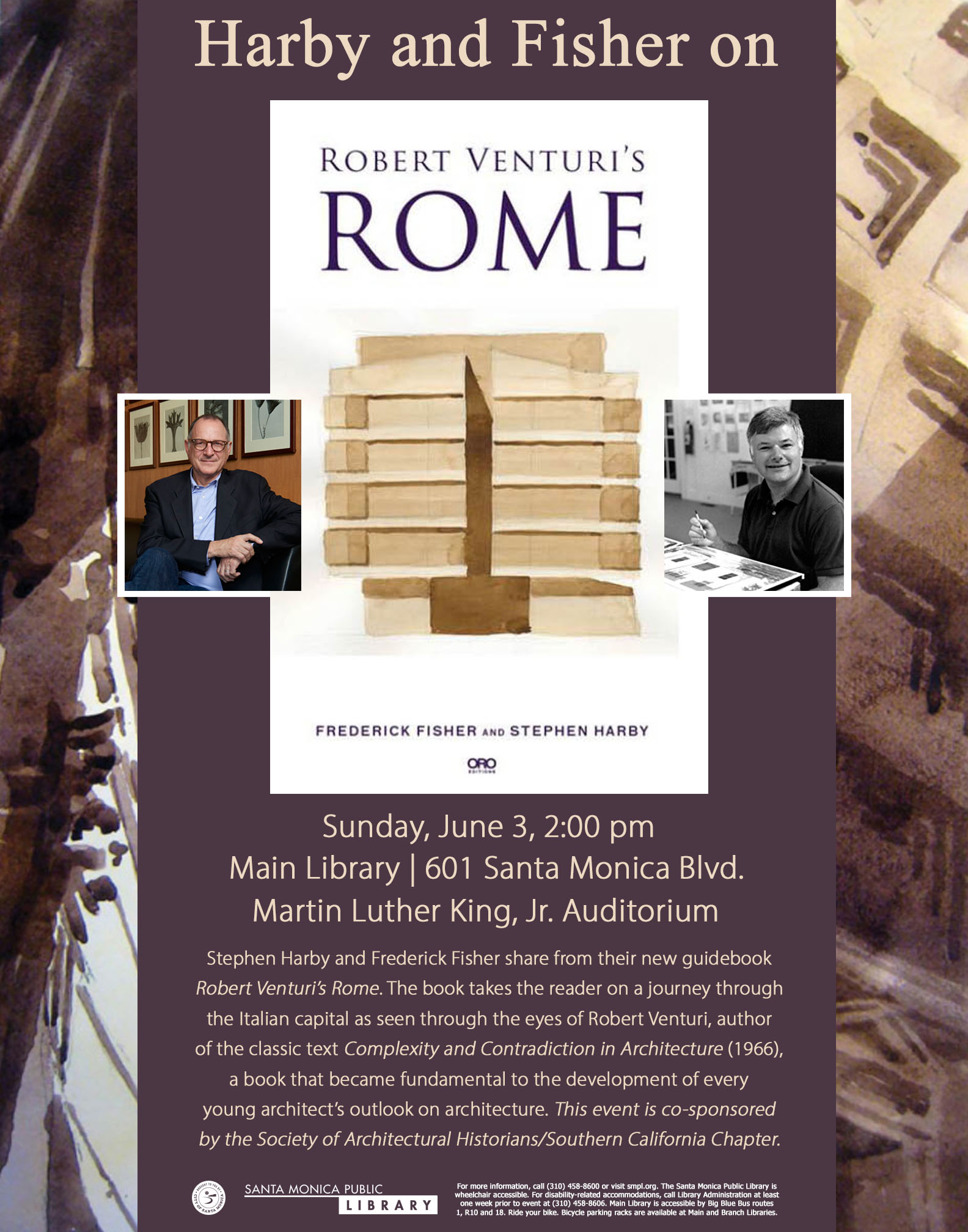 An upcoming event at Santa Monica Public Library promises an inside look at the Italian capital, Rome.

“Harby and Fisher on Venturi’s Rome,” will take place Sunday, June 3, at the Main Library’s Auditorium at 2 p.m.

“The book takes the reader on a journey through the Italian capital as seen through the eyes of Robert Venturi, author of the classic 1966 text, Complexity and Contradiction in Architecture, a book that became fundamental to the development of every young architect’s outlook on architecture. Written by two winners of the prestigious Rome Prize, this new book revisits the Roman buildings and places that stimulated Venturi and reexamines them from the perspective of fifty years of architectural advancements. The book features exceptionally beautiful watercolor illustrations of the sites,” according to the Library.

Frederick Fisher is an architect known for creating environments of timeless beauty and meaning with an emphasis on light and connection to art and nature. He earned his Bachelor of Arts degree from Oberlin College and Master’s Degree in Architecture from UCLA. Santa Monica is home to numerous buildings by his firm, Frederick Fisher & Partners, including the Hillstone restaurant (2005), the Annenberg Community Beach House (2009) and a new Science Building for Crossroads School (2015).

Stephen Harby practiced architecture with the late Charles Moore and was a Visiting Lecturer at the Yale School of Architecture from 2001-2016. Harby is also a recognized artist whose work is found in the Art Institute of Chicago. He is a longtime member of the Society of Architectural Historians and has conducted numerous tours and programs over many years.

“The authors will discuss the genesis of the idea for the project, the importance of Venturi’s text, how they went about approaching the sites, representing them through sketches and paintings and the research and analysis that went into presenting these materials coherently to the reader. A book sale and signing follows the program. This event is part of the Library’s Authors on Architecture series and is co-sponsored by the Society of Architectural Historians/Southern California Chapter (SAH/SCC),” the Library said.

This program is free and open to all ages. Seating is limited and on a first arrival basis. The Santa Monica Public Library is wheelchair accessible. For disability-related accommodations, call Library Administration at (310) 458-8606 one week prior to event. The Main Library is directly served by Big Blue Bus lines 1, R10, and 18. The Expo Line and other bus routes stop nearby. Ride your bike. Bicycle parking racks are available at the library.