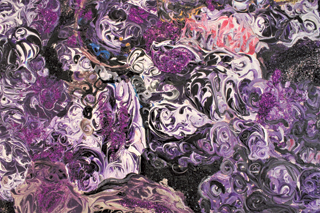 This spring, flowers are not the only things that are blooming, a new row of art galleries along Ocean Park Boulevard are popping up; the first of which is the bG Gallery. Now in its eighth year, the bG Gallery has moved to 3009 Ocean Park Blvd. The relocation occurred after the building at Bergamot Station which housed the gallery was repurposed. Saturday May 12 was not only an opening reception for artist Simone Gad’s “FUDOGS on Black,” but also an opportunity to connect with the Ocean Park art scene.

Om Bleicher, owner of the bG Gallery, told The Mirror that there “are two sections to the gallery” one for “group shows” and another for “bG’s more established artists.” The current group show on exhibition is “Stripes.”

“The idea came to me while designing a postcard. I was cropping images,” stated Bleicher. Contributions from over 60 artists make up the current group exhibition. “We look forward to being part of a new art area forming on Ocean Park Blvd, between 30th and 31st,” he said.

In the bG Gallery’s main exhibition area, artist Simone Gad’s “FUDOGS on Black” sparkled. The body of work was inspired by “Chinese guardian lions.” Gad stated that she “layers acrylic paint, oil pastel and glitter” to create her artworks. The process can take months, according to the artist. In addition to her “expressive swirling paint” the exhibition also included new Fu Dog drawings as well.

“FUDOGS on Black” is Gad’s third exhibition with the bG Gallery. Previously she presented a solo exhibition for the Getty’s Pacific Standard Time Initiative, according to Bleicher. Gad’s work spans multiple decades, as she “rose to prominence in the Los Angeles art scene throughout the 1970s.”

In her current exhibition, paint on canvass is the predominant medium, however, Gad said that she started creating art with velvet and satin, using “vintage materials.” Additional works include collages on vinyl as well as themes of “celebrity and stardom.”

Despite the move to the new location, the calendar of exhibitions remains on schedule, with the next group show “Circular” opening May 26. bG Gallery is the first to open their doors on Ocean Park’s new art block.