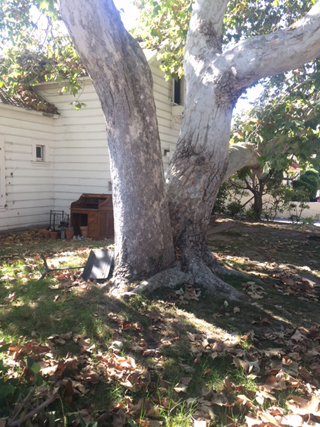 …was how Jerry Rubin, Santa Monica’s own professional positivist, described Monday night’s down to the wire Landmark Commission vote to landmark the huge Sycamore at 1122 California Ave., near the intersection of 12th Street and California. In fact it was a great victory for the entire city, as trees are rarely accorded the respect that buildings get in the landmarking process. Of the approximately 130 City landmarks only five are trees (although Palisades Park is our best cliffside landmarked forest). Two of those land marked trees are already gone, so adding one back restores somewhat the balance of nature so to speak.

s wasn’t just a large tree; it’s a very special tree. First it’s a native tree: the other three landmark trees are non-natives. Also it’s old, almost 100 years old as it was planted sometime before 1922. Somehow through the decades it has survived from the possible stresses of bad pruning, of root damage by adjacent construction, of severe drought (that is stressing all our City’s trees), of the ravages of the invasive shot hole borer (a pest that often condemns such trees), and of the ultimate killer, man, who blithely destroys trees to clear land to build buildings usually using the bones of trees killed elsewhere.

Then it has an unusual configuration of two trunks with their roots encircling each other. While not unheard of, two trees growing together makes it a particularly attractive composition, and suggests how we might all cohabitate in a crowded world, as these two trees do, sharing equally the limited resources of moisture, sunlight and soil nutrients. And it is huge. The two trunks’ combined circumference at the four and one half foot high belt line, are about 18 feet and the dripline is about 72 feet in diameter (bigger than the 50 foot wide lot it sits on) while the height is approximately 82 feet. This size allows it to do everything large trees do: reduce the heat island effect of cities, shade the adjacent residences in the summer, provide habitat for animals (birds, bees, squirrels) and of course increase property value for its owners and neighbors.

While the public testimony at this second Landmarks Commission hearing (it had been continued from December 11, 2017) was strongly in favor of Landmarking, with the Sierra Club, the Santa Monica Conservancy, the neighborhood groups, and the Save our Sycamore (SOS) committee among others all weighing in, the star of the show was John Cyrus Smith who eloquently led the charge for landmarking. He graciously agreed not to open the floodgates to landmarking every tree in Santa Monica; he met with the tree’s owner to assure him that the landmarking was not an undue hardship and he tirelessly worked to mobilize the neighbors in support of the designation.

Landmark designation is not an arbitrary feel good process. In deciding a landmarking designation the commission must make one or more of the specific following findings.

Most of these findings are by their nature subjective. When is a historic personage significant enough to get a landmark, or when is a building iconic enough? In this very subjective environment, the City staff said that this tree did not rise to the standard to be able to make the findings and gave it a negative staff report. This negative report created most of the resistance to landmarking the tree along with the owners who, while not planning to cut it down, wanted to have free reign on their smaller than normal property.

The deliberations of the commission were actually exemplary of how a commission can find its way in public by each member voting their conscience in spite of majority pressure. Two commissioners, O’Neill and Shari, changed their initial position during the debate indicating that they were responsive to the unfolding nuances of the case and were not approaching this case with a predetermined opinion.

Commissioner Rosenbaum, a former City Attorney, cleanly swatted away irrelevant issues (such as that the tree was not under immediate threat) and zeroed in on making the legal findings (#2 and #6) required for landmarking. Commissioner Green supported the owners’ right to use their property free of public entanglements while Commissioner Sloan advocated for the tree’s aesthetic merit (finding #2) and against the neglect that artists and artistic considerations often suffer. And it was Commissioner Bach who collaboratively created the atmosphere for the 4 to 2 vote in favor landmarking with the caveat that the case come back to define the best additional conditions for insuring the health of the tree while simultaneously minimizing the burden on the property’s owner’s. Fortunately the tree is in the front of the property, so maintaining the 15’ clear of the trunk recommended by the arborist is certainly doable.

SMa.r.t. commends the Commission for acting independently of the staff recommendation, for patient deliberations and stamina in spite of their long agenda which went on past 11 p.m. and for a win-win solution that preserved this iconic tree for as long as it naturally lives and also minimizes the impact on what will hopefully be a proud owner.

As Maryanne La Guardia said at the hearing only God can make a tree but only the Landmark Commission can landmark one and fortunately they did.