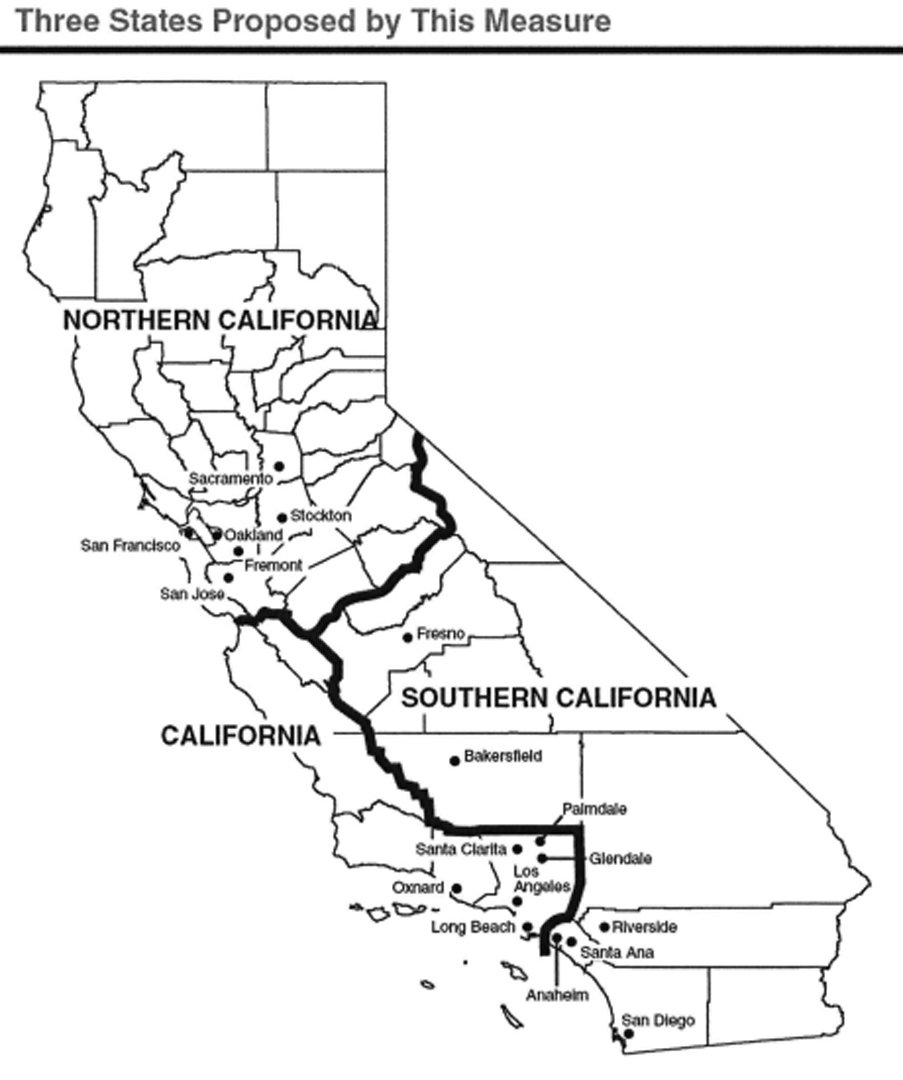 It’s silly season again in California. For the seventh time in the last 30 years or so, activists are suggesting the state needs to be split. But this effort has gotten enough financial backing to make the November general election ballot.

While this year’s effort seems fatuous, some past attempts to tear California into pieces actually made a little sense. That’s especially been true of the so-called state of Jefferson, which would combine most of rural Northern California with a slice of southern Oregon and hope to create something new.

That notion first appeared in the early 1940s, as rural residents felt trampled in state politics by the far more populous regions surrounding Los Angeles, San Francisco and San Diego. Their gripes have had more merit ever since the U.S. Supreme Court’s landmark one-person, one-vote decision destroyed the North state’s former dominance in the state Senate, where representation long was based on geography and not population.

Now, Jefferson adherents say they have so few representatives in Sacramento they might as well have none and that their interests are constantly overlooked.

But Jefferson advocates have yet to prove their putative state could be economically viable, nor have they figured a way around the Constitutional requirement that – failing a successful state initiative – the entire state Legislature – and Oregon’s, too – would have to agree to their forming the first rump state since the Civil War era.

Chances are, Jefferson would end up with two Republicans in the U.S. Senate, making odds very slim for the Democrat-controlled Legislature ever to agree to a divorce.

But the newest state-splitting idea isn’t even Jefferson. It’s far more blatantly political, with convoluted new boundaries separating the most populous and solidly Democratic coastal areas, plus most of the Bay area and a region stretching east to Sacramento, from much of rural California, the Central Valley and Orange and San Diego counties, all places were Republicans fare better than along the coast.

Unlike Jefferson, the new three-state advocates – who number no elected officials among their leaders – actually issued a “Declaration of Independence,” containing some language found in the original declaration of 1776.

But it inserts some new passages: “The history of the present governor and government of California is a history of repeated injuries and usurpations, all having in direct object the establishment of a tyranny of the counties of New California and the state of California.” It lists as grievances “years of over taxation, regulation and mono party politics.”

In short, these folks would like to take most of the land area of this state and create a place with few regulations, very low taxes and Republican rule.

The proposed boundaries somewhat resemble those of a 2011 proposal from then-Riverside County Supervisor Jeff Stone, now a Republican state senator, who complained at the time that “We have a state Legislature that has gone wild…There is only one solution: a serious secession from the liberal arm of the state of California.”

Stone’s idea didn’t get far when he proposed it, even if his planned boundaries weren’t quite as twisty as what the new initiative proposes.

Both notions represent the current political split in California, which is less dominated by differences between north and south than by contrasts between the state’s inland and coastal counties.

The new measure is far less complex than a six-state idea pushed a couple of years ago by venture capitalist Tim Draper, who essentially wanted to put six more Democrats and four new Republicans into the U.S. Senate. Draper tried to qualify a ballot initiative jump-starting his idea, but it never gained traction. Draper is also behind the new three-state plan, which would likely put four Democrats and two Republicans into the Senate.

The bottom line on these ideas, and the other 27 that have arisen over the last 70 years, is that so long as the U.S. Constitution gives Congress veto power over any such notion, none is likely to go anywhere, no matter how Californians vote. For tripling California’s numbers in the Senate would dilute the clout of every other state.

Which makes it little more than harmless fun to consider these things, while serious thinkers instead try to figure ways of making the current state work better within its existing boundaries.