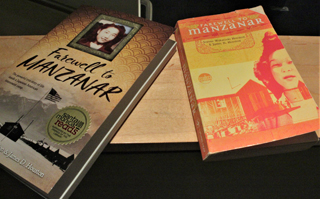 Inside the MLK Jr. Auditorium at the Santa Monica Public Library, the 16th annual, citywide reading event, Santa Monica Reads officially began Saturday May 12. A full auditorium of residents, librarians, students, and guests were present for “An Afternoon with Jeanne Wakatsuki Houston,” author of the book “Farewell to Manzanar” and this year’s selected book for Santa Monica Reads. The event marked the first in a series free public programs and discussions focusing on the selected book.

Patty Wong, Director of Library Services for the Santa Monica Public Library explained that the narrative is “told from Jeanne’s perspective, as she recounts the struggles and resilience of her family and the camp community.”

Now 83 years old, Houston was only seven when she and her family were forced to leave their Ocean Park home during World War II.

The audience included “Nisei” and “Sansei,” terms used to identify second and third generation Japanese Americans. Houston, like many in the room, is considered “Nisei,” “American Citizens by birth.”

Some attendees shared their experience and how President Roosevelt’s Executive Order 9066 affected them and their families; thanking Houston for writing her memoir.

Shilla Nassi, an Iranian immigrant asked Houston whether or not, “she was aware that people were documenting the [internment] camps and taking photographs.” Houston responded by pointing out that at the time there was no internet, or television and so the sources of information came from newspapers. At the conclusion of the event, Nassi lined up to get her copy of “Farewell to Manzanar” signed by the author.

One of the most difficult things about the internment stated Houston was “coming out of camp.” “We didn’t have homes. We didn’t have jobs. Everyone had to start over again,” she said.

Her book, which covers “the Japanese American experience during and after the World War II Internment” was published in 1973, decades after the incident.

Houston’s daughter, Corinne Houston Traugott, was in attendance, and stated that “coming to these events with my mom, I’ll always learn something about her that I didn’t know.”

“‘Farewell to Manzanar’ is available from the Santa Monica Library or your local bookstore.”