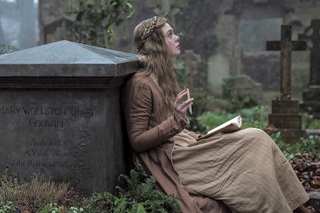 Although she lived from 1797 to 1851, Mary Shelley has her own IMDB page (that’s the entertainment industry’s “encyclopedia.”) Few artists of the early 1800s can boast of an IMDB listing. Her work has been immortalized time and again in contemporary film, theatre and cinema. The characters that live in her books are universal in their complexities, their fears and loneliness – especially the creature her most famous story brought from death to back to life, “Frankenstein.”

The movie “Mary Shelley”, written and directed by Haifaa Al-Mansour, a young woman from Saudi Arabia, very successfully distills the life and character of this fascinating and complex writer. As I left the screening I felt a bond with a highly intelligent, caring, deeply observant, thoughtful, philosophical writer of the early 1800’s. Shelley’s life was anything but mundane, yet she represented her generation well. I was inspired to do some research on her life in detail. I now realize what an excellent job the writer/director accomplished in bringing this great woman to life for our contemporary viewers.

You can identify with the situations Shelley faced in her life, as they are surprisingly similar to the stresses we face today. You might be inspired to read some of her lesser-known works such as Valperga, Mathilda, Lodore and Falkner. She even wrote travel books such as “Rambles in Germany and Italy.’’ Here is a woman who succeeded in a profession that at the time was only deemed accessible to men. She was able to overcome a condescension towards women that was many times more powerful than it is today.

I’m sure the director herself could identify with Mary’s alienation from society. She has succeeded in creating a beautifully flowing film that conveys a wealth of history about influential literary greats. The musical score by Amelia Warner is the perfect accompaniment to the story and the production design is superb; scenes that take place in London, Scotland and Switzerland in the early 1800s, set up a distinct realism without being over stylized. 20-year-old Elle Fanning brings an extraordinary performance as Mary Shelley. With brief looks and reactions this talented actress conveys volumes about Mary’s intellectual and emotional loneliness, her ability to cope with tragedy and her courageous refusal to accept what she believes is unjust.

Throughout history, women have fought ingrained over-restrictive morals in society. After seeing this film you will not only understand one of the greats of English literature, you will also see that (but for the superficial differences in her chronological environment) Mary Shelley above all had the same questions, uncertainties, fears, joys and flaws that all of us today experience. This Oscar-worthy movie is valuable as an education in history and literary figures. At the same time, it will intrigue its audience to learn more about this fascinating superstar of nineteenth century literature. I’m looking forward to seeing more work by Haifaa Al-Mansour. “Mary Shelley” is now playing at Laemmle’s Monica Film Center.

By Kathy Whitney Boole May 25, 2018
in Life and Arts, News
Related Posts