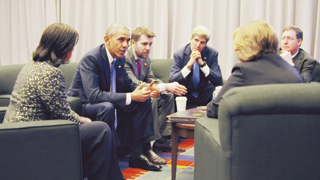 Overheard conversation of a runner in Palisades Park while stretching: “Did you watch that documentary I told you to see?” Documentaries have gained exponentially in popularity recently, not surprisingly, as they are one of our greatest sources of knowledge today.

“The Final Year” is one of these documentaries you should see. It’s a compilation of footage that makes an exceptional reality show. Emmy-Award-winning Director Greg Barker and his team were able to gain astonishing access to the inner workings of the Obama Administration’s foreign policy team during his last year in office, from January 2017 to January 2018. The focus is on President Barack Obama, Secretary of State John Kerry, UN Ambassador Samantha Power and National Security Advisor and Speech Writer Ben Rhodes as they work to resolve problems pertaining to climate change, human rights, arms reduction and nuclear disarmament around the world. The film is a thoughtful and non-judgmental stream of segments from the lives of these top-level political figures as they try to resolve actual “earth-shaking” situations. The narrative of the film lays everything out as the work progresses. It gives the Obama administration a human quality. At the same time, you perceive the awareness by each of the players of the huge responsibility on their shoulders.

In a discussion following the screening, Director Barker explained that although he and his filmmakers had access to the West Wing, Air Force One and the travel locations of the players they were tracking, they also had to squeeze into very small spaces or reach remote villages to follow their subjects. Small noninvasive SLR cameras were sometimes used rather than bulky equipment. The final edit of the footage paints a realistic picture of highs and lows, successes and failures, of a vividly human team. Barker noted that Rhodes, while incredibly intelligent, was inherently shy and uncomfortable when the camera was pointed at him. The director had to inspire him to relax. In one scene Rhodes explains why he often felt compelled to exile himself to a hidden confined space in the basement of the White House in order to focus on writing speeches for the President.

There are two extraordinarily poignant scenes. As Samantha Power gives an address to a group of immigrants receiving their U.S. citizenship, she reminds them, with tears in her eyes, that she was an immigrant too, having come to our country from Ireland as a child. Ben Rhodes’ wordless devastation is painful as he reacts to the electoral win of a new President who has vowed to tear apart all the work that has been accomplished by his team.

“The Final Year” will remind you that our country has set an example to the world for over 200 years. We are powerful organization of citizens who have chosen to band together. We share the responsibility of choosing a leader who must be a superb Human Resources Director – who will put together a team to guide our country’s choices and image in domestic and world affairs.

By Kathy Whitney Boole May 21, 2018
in Life and Arts, News
Related Posts