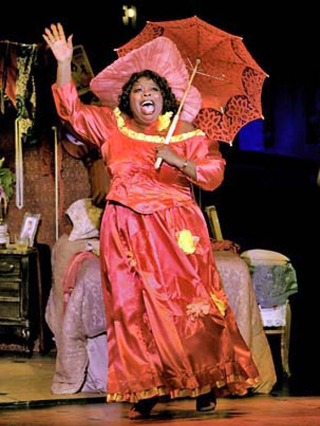 Are you ready for an evening of being treated to some of the most famous blues songs ever written?  Would you like to take a musical journey through the love lives of three characters brought to life by amazingly talented women?  How about being treated to highly trained legit voices belting out songs of love and romance, and the ensuing disappointments, yearning, passion, sadness, loneliness, and heartbreak?   If your answer is “yes,“ then don’t miss the Tony and Olivier Award-nominated musical “Blues in the Night,” on stage at The Wallis Annenberg Center for the Performing Arts.  This exciting musical revue was conceived and brilliantly directed by Sheldon Epps, with original vocal arrangement and musical direction by Chapman Roberts, and orchestrations and additional vocal arrangements by Sy Johnson, tied together by Music Director Abdul Hamid Royal.

The love stories of these characters are told through songs, which take us on an emotional roller coaster ride through the lives of The Lady from the Road (Yvette Cason,) The Woman of the World (Paulette Ivory,) and The Girl with the Date (Bryce Charles). John Iacovelli’s excellent Scenic Design created a small room for each of them who live in a rundown Chicago hotel, the outside of the building illuminated with signs that read “Jazz,” “Hotel” and “Bar.” Jared A. Sayeg’s superb lighting design accents the opening scene with a colorful spotlight on each of the women in their respective rooms.  They are frozen in silhouette assuming graceful poses reminiscent of old photos from the 1920’s and 30’s. Epps uses this visually stunning theatrical device throughout the production punctuating the opening and closing of a number with a different stilled look.

Cason’s character (“The Lady”) is the quintessential red-hot momma and boy can she sing.  She resides in a small room with a bed and a trunk where she keeps her cherished possessions, including an assortment of nightgowns, dresses, hats, and colorful outlandish outfits designed by costume designer Dana Rebecca Woods.   Her character is the storyteller and she breaks the fourth wall frequently to present the narrative and to play with the audience.  She has the best laugh lines such as “I’m not getting older – I’m just moving slower.”  Cason blasts out the hilarious Leola and Wesley Wilson’s “Take Me For a Buggy Ride,” a song loaded with sexual metaphors.  But the showstopper is her rendition of Andy Razaf and Wesley Wilson’s “Kitchen Man.”  Dressed in a flamboyant costume, a matching crazy hat, and carrying a parasol, which she occasionally uses as a phallic symbol, Cason turns food into a variety of sexual acts and I promise you you’ll never look at a hot dog in quite the same way again.  She also sings Jimmy Davis, Jimmy Sherman and Roger “Ram” Ramierz’s “Lover Man” in a three-part harmony with “The Girl” and “The Woman,” which is how many of the songs are sung, including Bessie Smith’s “Blue Blues,” the first number at the top of the show.  Throughout the performance, Cason’s presence is electric and the pivotal character around which the others rotate.

Paulette Ivory’s character (“The Woman,”) has had her share of heartbreak and sexual encounters.  She drowns out her sorrows by taking to the bottle as she sings Billy Strayhorn’s “Lush Life,” a memory of past loves.  No shrinking violet, she also belts out Alberta Hunter’s sexy “Rough and Ready Man.”  The youngest member of the trio is Bryce Charles (“The Girl”).  She’s still somewhat enthusiastic, as life hasn’t quite beaten her down yet.  We see the transition in her emotional life when she goes from “Mack Gordon and Henry Revel’s “I’ve Got A Date With A Dream,” to her heartbreaking rendition of Ann Ronell’s “Willow Weep For Me.”  Filled with visceral emotion, don’t be surprised if you get a little lump in your throat and a tear in your eye.   Two other outstanding songs include, Jimmy Cox’s “Nobody Knows You When You’re Down And Out,” sung by the ensemble, and Bessie Smith’s “Wasted Life Blues,” sung by “The Lady.”

Rounding out the cast is Chester Gregory as The Man in the Saloon. He is a saloon singer and kind of a wise guy.  Gregory gets his share of song and dance moments with such pieces as Duke Ellington and Mack David’s “I’m Just a Lucky So-and So,” and Ida Cox’s “Wild Women Don’t Have the Blues”.  He is somewhat like a one-man Greek chorus as he observes and musically reports on the emotional temperature of the women with lines like “These women are on the edge.”  He also does a nice job with Bessie Smith’s “Baby Doll,” and Johnny Mercer, Gordon Jenkins, and Bernard Hanighen’s “When A Woman Loves A Man and “Am I blue”.

Additional members of the superb technical team include, Cricket S. Myers’ on Sound Design and the excellent five-piece orchestra.  Under the direction of pianist Lanny Hartley, the musicians are:  Kevin O’Neal on Bass, Randall Willis and Louis Van Taylor on Reeds, Lance Lee on Percussion and Fernando Pullum on Trumpet.

This sensational evening ended with a foot stomping reprise of Willard Robinson’s “Four Walls (And One Dirty Window) Blues.” The cheering audience sprang to their feet and clapped along in rhythm.  The songs may be about the blues, but be rest assured that you will leave The Wallis smiling and humming one of the tunes.