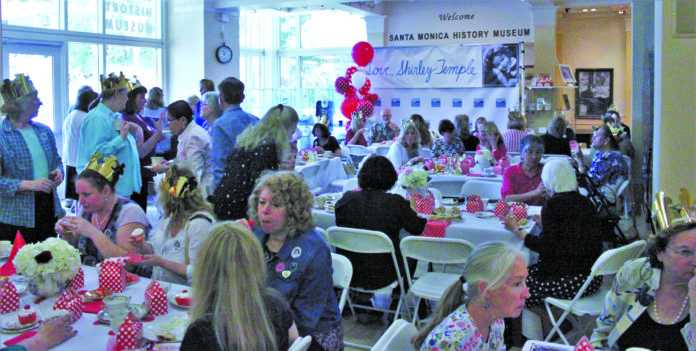 Santa Monica History Museum honored the birthday of Santa Monica resident and actress Shirley Temple, Saturday, April 21. In honor of what would’ve been her 90th birthday, the museum hosted a tea party, complete with an exhibition of some of the wardrobe, and props featured in her iconic films. Guests included fans and family.

Charles Black Jr., son of the departed actress, was at the tea party and spoke about his mother, her legacy and the relationship that she had with the city of Santa Monica. “She was born and raised in Santa Monica,” he stated and then added that he was “very pleased that people are preserving her legacy” citing that studio tours, and other events were also being held during the weekend.

Melissa Tonnessen, founder of Shirley’s Army – a Shirley Temple fan club – said that she feels that “Shirley Temple is relative today,” and references the child actress’ work in her elementary classroom. As Colonel of Shirley’s Army, she is admin of a Facebook group of more than 1,000 members that follow all things Shirley; from auctions to art to events.

Inside the Santa Monica History Museum, more than a dozen tables were arranged by the museum’s staff and volunteers. Additionally, tea cups and saucers were provided for guests while a slide show of Shirley Temple photos and clips played on a screen near the desserts.

Kate Holt, Christy Thomas, and Fanny Thomas said that they selected their seats by the look of the cups. “We like to have tea!” stated Holt. Fanny Thomas added that she liked the princess costume and would’ve liked to try it on. “She was hoping someone would ask her to,” joked Christy Thomas.

Mid-tea, contributors of the exhibition spoke about how the celebration came to fruition. Susan Gabriel Potter, President of the museum’s board of directors, Charles Black Jr., as well as Michelle Joseff, the grand-daughter of famed costume jeweler Eugene Joseff, took turns speaking. All three cited that the scepter and crown that Eugene created for the 1938 film The

Little Princess had not been in the same room as the dress since the completion of the film. The tea party came to a close after singing “Happy Birthday.”

Eddie Guerboian, the Director of Development for the Santa Monica History Museum, stated that the museum hosts between “four and six exhibits per year.” Prior to his role as director he had served as a chairman of the museum’s board. He added that the museum keeps “history alive in Santa Monica” through a combination of staff, community sponsors, and volunteers, all of which provide education about the city’s history to the community.