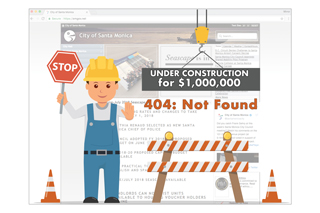 The allocation of $1 million caused many in the community to raise an eyebrow at the seemingly-astronomical amount that went to a design firm not based in Santa Monica.

“Built on an open source platform, the site will be consolidate and reorganize content, streamline transactions and ease two-way communication between the public and the City,” said Debbie Lee, Chief Communications Officer with the City of Santa Monica

The City awarded the website contract to Edenspiekermann, an international design firm with offices in Downtown L.A. They said that the firm was selected over local competitors in the RFP process as it was “was identified as the most qualified firm for this project.”

When questioned about the $1 million spend on a website, City Manager Rick Cole told The Mirror that, “We will use scalable, cloud-based technology that can grow with the needs of the community and organization alike. It will modernize digital services such as web forms, interactive maps, events and news that saves time, creates efficiencies and improves overall user experience.”

The scope of work does not include single payment systems or single sign-on features, but forms will be able to be submitted. Content management system training and one year of maintenance is included.

“[The new website] will save taxpayer dollars by cutting lost time, automating routine functions, eliminating duplication and speeding up how we serve the community,” Cole said.

According to Quora the most expensive website build in the world cost $18 million over five years.