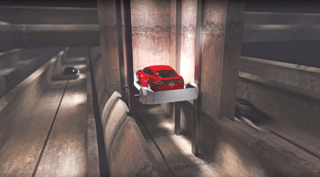 Elon Musk’s The Boring Company seeks approval to dig a tunnel along the 405 freeway.

Elon Musk is known for putting on a good show and he wowed ‘em at Leo Baeck Temple Thursday, May 17.

Musk was there to explain The Boring Company – the high tech outfit that seeks to drill tunnels beneath much of Los Angeles, creating a new kind of high-tech transportation network.

Digging tunnels and removing earth is “boring” in the words of Musk – but there was a lot of razzle-dazzle in the videos shown at this public informational hearing.

This might be expected from the guy who also started Tesla and SpaceX.

Videos showed futuristic vehicles carrying up to 16 passengers at a time – at speeds approaching 130 miles per hour – zooming to and fro beneath the city.

All this activity would take place more than 30 feet below the earth’s surface.

Musk assured the audience everything would be quiet and clean – “invisible” to the world above.

Musk said that the huge boring machines that operate below ground can’t be heard at surface levels and there isn’t any detectable vibration. There will also be no noise when electric vans take the place of the boring machines.

Huge stations won’t be needed, according to Musk. The Boring Company envisions lots of smaller stations all throughout the region.

One big advantage to this idea, according to Musk, is that there is almost no limit to the number of tunnels that can be built.

If the transportation network needs more tunnels, he said, more tunnels can always be dug by simply going lower beneath the earth’s surface.

In the event of an earthquake, according to Musk, being inside a tunnel would actually be one of the safest places one could be. Earthquakes harm surface structures, not things buried well below the surface, he explained.

The Boring Company is seeking to fast track approvals to build some test tunnels that will be used to explore different tunneling and vehicular concepts.

A test tunnel below Hawthorne has been built; now The Boring Company wants to build a 2.7-mile tunnel from Hawthorne to Westwood along the east side of the 405.

Information gleaned from these tests will be incorporated into a bigger plan that envisions multiple tunnels linking all parts of the city, assuming The Boring Company decides to proceed (and it’s all approved).

Musk said the company will provide a full Environmental Impact Report (EIR) when it is ready to present a fuller plan, but for now, the company wants an exemption from CEQA (California Environmental Quality Act) rules so that the company can conduct its tests without delay.

If required to fully comply with CEQA at this time could add years to the time required to bring all these futuristic plans to fruition, said Musk.

Once built – if everything goes according to plan – riders could zoom from Sherman Oaks to LAX in 12 minutes – for a dollar, said Steve Davis, The Boring Company’s project manager. A trip from Downtown LA to LAX would take eight minutes.

The Boring Company envisions a 700 mph “Hyperloop” train that would one day transport people from Los Angeles to San Francisco in 30 minutes.

Moreover, all this would be done using private, not public, funds.

The Boring Company is in talks with transportation authorities in other regions about building underground tunnels.

A tunnel has been permitted in the Baltimore area. Some along the east coast hope for an eventual route connecting Washington to New York.

Chicago is discussing a tunnel from Downtown to O’Hare Airport.

Rabbi Ken Chasen of Leo Baeck Temple opened the program by noting that the temple can be very hard to reach. Drivers are either stuck on Sepulveda or stuck on the 405.

Chasen said the temple has not taken an official position on the tunneling idea, but quickly added that Leo Baeck Temple was happy to help facilitate public discussion on this issue. Approximately 750 individuals were in attendance May 17.

David Murphy, a local tech entrepreneur who got Elon Musk to fund a Los Angeles-based transportation study years ago, said it would be wonderful if a tunnel could be drilled through the Sepulveda Pass, connecting the San Fernando Valley and the Westside.

Elyse Arbour, a Brentwood real estate agent, said The Boring Company was actually very exciting. She was not alone in her sentiment; many in the crowd cheered as Musk and his associates showed animated videos depicting how the new transportation system would work.

While applause alone can’t be construed as any kind of scientific measure of public support, it seemed most in the Leo Baeck crowd favored the ideas put forth by The Boring Company.

After all, unhappiness with LA’s traffic situation is the one thing everyone in this town shares.

According to Musk, the tunnel plan is “worth a try.”

Not so fast, say some.

The lawsuit was filed by petitioners May 2 against the City of Los Angeles, the Los Angeles Board of Building and Safety Commissioners, The Boring Company, Los Angeles Metropolitan Transportation Authority and the City of Culver City.

In addition to seeking procedural cleanups in how this project got as far as it has, Rosen, Concerned Brentwood Coalition and Sunset Coalition are seeking money to cover the costs of the suit and reasonable attorneys’ fees.

Rosen and the two organizations are represented by attorney John Given.