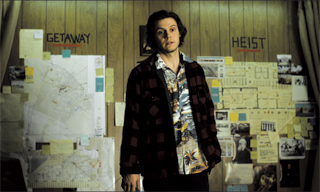 A favorite at Sundance 2018, “American Animals” is a fascinating mix of documentary and classic heist story. Interviews with the real four protagonists of the 2004 event are interspersed with performances featuring actors playing them. It begins as a basic presentation of a game plan. Towards the end the four become inescapably embroiled in an uncontrollable cascade of events they have initiated and the mood and pace of the story change drastically. This is both a psychological study and a uniquely twisted coming of age drama, with a nod to films such as “Reservoir Dogs,” “Goodfellas,” and to “Ocean’s Eleven,” probably the actual inspiration for the outrageous plot concocted by the four.

One of the men was attending Transylvania University in Lexington Kentucky, established in 1780. Transylvania’s library has a locked room, which contains an extremely valuable collection of rare books, including “Birds of America” by John James Audubon. This treasure is precisely the focus of the robbery the four men plan. It’s ironic that Audubon, when he was working on this incredible book in the early 1800s, lost the original to a pack of rats that invaded his storage trunk and chewed it to pieces. Undaunted, he started over and recreated his drawings.

The film’s director Bart Layton grew up in South London and has done most of his work in the documentary genre. He explained in a discussion following my screening that he was struck by the tendency of the four men to see their planned robbery as an innocent escapade rather than an evil act. He also noted that our society’s expectations for young men are immense, at an age when our brains are going through tremendous changes. Certainly the pre-frontal cortex, the rational part of the brain, does not seem to have fully developed yet in these men. Layton is able to perceive with clear eyes, not only this phenomenon, but also the landscape and upper middle class social setting where the young men grew up.

“American Animals” is a wake-up call to our society that young adults might perceive they are passengers in life rather than drivers, in a career trajectory that’s been pre-established for them. Blake Jenner who plays “Chaz” in the film, confirmed that all four felt driven to do something – anything, that might be considered “remarkable,” in order to break the mold of expectations. The planning and carrying out of an outrageous heist was their answer to that desire. Where does the imagined escapade end and reality begin? That line is shrouded in dark clouds in this story.

In the opening sequence a creative visual trick sets the atmosphere for the story. Layton said this was actually an accident, from a misconstrued suggestion to his editor. I would have used it at the end of the story rather than the beginning. See what you think. “American Animals” illustrates just how close we are emotionally to the other species of animals with which we share our planet.