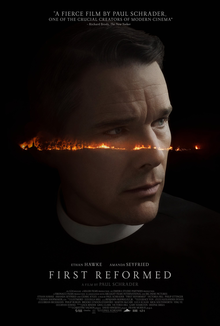 “First Reformed,” about a troubled pastor in upstate New York, is a disturbing, thought-provoking look at despair.  The pastor (Reverend Toller), played exceedingly well by Ethan Hawke, has been struggling with inner demons since the death of his son Joseph, whom he encouraged to serve in Iraq.  He is solitary, an introvert, and an alcoholic, who has committed to keeping a journal for a year to document his feelings and for self examination.  The film is uncompromising, intellectual, and has political implications regarding climate change and America’s wars in the Middle East.

Toller’s church is preparing for its 250th anniversary celebration and the movie shows all the preparation and planning involved.  There is a startling contrast between the modest church Toller presides over and the nearby one run by an outgoing pastor named Jeffers, played by Cedric the Entertainer, in a rare and effective dramatic role.  Toller’s church is run-down and sparsely attended, while Jeffers’ is a well-attended megachurch, made up of wealthy donors with questionable environmental practices.

One day after church, Toller is approached by a pregnant congregant named Mary who wants the reverend to counsel her husband Michael, a radical environmentalist.  Michael believes the future of the world looks very bleak and inhabitable, and he looks to Toller, whom he respects, for affirmation.   He cannot bear to think what is in store for his child.  It is for these reasons, rather than not wanting to be a father, that Michael wants his wife to have an abortion.

As Toller becomes more and more involved in Mary’s situation, it begins to gnaw at him.  When Mary shows him something in her garage belonging to her husband, which scared her, a moral decision has to be made as to what will be done with the item.  As the film progresses, Toller also begins to take on Michael’s cause, through copious amounts of research and video viewing.  However, Toller’s interest seems less rooted in commitment and panic than Michael’s.

The film is very well-done, with strong performances that really resonate, in particular by Ethan Hawke.  The movie has a minimalist, bare-bones production to it.

There were some elements that did not work for me.  The fantasy sequence when Mary visits Rev. Toller and they are performing an intimate breathing exercise did not work for me.  Also, Rev. Toller’s motivations for wanting to perform an extreme act at the very end of the film did not make sense.  As far as the film’s final graphic sequence, I think viewers will either love it, scratch their heads in wonder, or feel it leaves too many unanswered questions.

The screenwriter of the film, Paul Schrader, specializes in anguished protagonists from Travis Bickle in “Taxi Driver” to Jake La Motta in “Raging Bull,” and Jesus Christ in “The Last Temptation of Christ.”

While this is a bleak, grueling endeavor, that is by no means an easy watch, it is worth watching for the theological dissection it provides and the discussions it will no doubt bring forth afterward, including the shockingly disturbing ending.