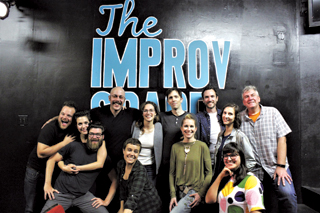 Saturday May 26, Westwood’s Improv Space was host to Rocket Science Improv’s one-year anniversary. The bimonthly event features local and visiting improvisational teams that act out a variety of sketches based on suggestions from the audience. On stage, the tone ranges from comedic to somber.

Headlining the anniversary show was Room 604. “We’re sort of the anchor team for Rocket Science,” said Room 604’s Jerry Witt. Despite missing one of their players, Witt explained, “we’re super excited about the show, it is our one-year anniversary, we’ve been doing this show on the second and fourth Saturday of every month for the last year.” The donation-based bimonthly brings teams from across the Westside to participate.

When the trouped stepped on to the stage, the audience suggested “recreation-outdoor-park” as the theme. Room 604 then presented a series of characters; a woman on roller skates, a drifter reading the paper, weight training partners, competitive power walkers, as well as benchwarmers in the dugout. The improvisational actors seamlessly transitioned between characters and scenes.

Miranda Shade and Mark D. Allen, in keeping with the suggested theme, performed as a couple with a troubled past: “You’re getting a lot better, I’ve been watching you,” stated Allen’s character. “You know I had to learn react and have quick reactions when things came towards me like balls or fists,” responded Shade’s character. The departure from comedy exhibited the performers’ breadth of acting skills. Shade stated that she’s been performing “for about 10 years” and got involved with Room 604 through Jerry Witt, “he’s very playful and I enjoy being with him on stage.”

“I think the challenge is the best thing, the challenge is that moment right before you get the suggestion of what the show is going to be and you don’t know what the show is going to be; and that is my favorite moment because it is the peak moment of adrenaline – with zero idea, the most fear – and [then] you get the suggestion and something happens,” said Allen. During his scene with Shade, Allen’s character was issued a restraining order due to domestic abuse.

While Room 604 was the headliner of the evening, teams Shark Week and Wow! also had their time on stage, bringing the audience to bursts of laughter through scenes involving birthday cake as well as jewelry. Shark Week, a quartet consisting of Kevin Shroyer, Ryan Tucker, Josh Birdbomb and Deidre Lee, was a new addition to Rocket Science Improv, although Lee explained that she had been on a team with Witt before. “I’ve always played this way, I’ve always been a playful person, doing different characters, trying different scenes and then I found out that improv geeks did the same thing,” Lees said; she was part of both the Shark Week and Wow! teams. “I found my peeps,” she concluded.

For those interested in improvisational acting, Josh Birdbom suggested making an indie team and be sure to “play with people you like.”