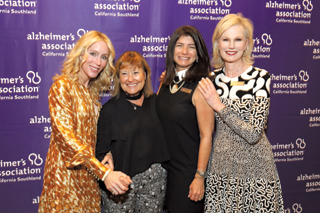 This week, the Alzheimer’s Association California Southland announced the event raised more than $160,000 toward the Association’s vision of a world without Alzheimer’s.

“We are here today to address what has been declared the number one greatest public health threat of our time – Alzheimer’s disease – which is a crisis with women at the epicenter,” said Jackie Kouri, Alzheimer’s Association California Southland Board Chair. “Alzheimer’s is already the most expensive disease in America, and it’s growing. The movement to end Alzheimer’s is a race against this tidal wave that gains size and momentum every day, unrelentingly faster and larger. Because Alzheimer’s is relentless, so must we be.”

Throughout the event women from across entertainment, science and business gave a glimpse into the disease from a variety of perspectives.

Academy and Tony-Award winning actress Marcia Gay Harden shared insightful, moving anecdotes from her memoir, “The Seasons of My Mother,” allowing others into her journey with her mother’s Alzheimer’s.

Alzheimer’s Association Chief Science Officer Maria Carrillo, PhD, discussed the $30 million U.S. POINTER Study, which focuses on the potential effects of multidimensional lifestyle interventions on cognitive decline. Dr. Carrillo also announced that the Association invests more than $15 million in research in the California Southland region, which is more than any other specific region in the country. Alzheimer’s Association National Early-Stage Advisor and former Intel executive Pam Montana shared her emotional experience living with Alzheimer’s, showing true strength and determination through a devastating diagnosis. These women joined the four co-chairs not just in bringing a voice to Alzheimer’s, but in also in bringing action toward care and a cure for those facing the disease.

The event was preceded by music performed by the 5th Dementia, a band of women and men facing dementia and other neurodegenerative diseases.

For more information on Reason to Hope or additional Alzheimer’s Association events, contact 323.309.8821.