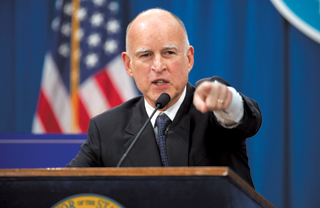 Gov. Jerry Brown has made this year something like a farewell tour, traveling the world as the de facto leader of American environmentalism and basking in compliments from major state and national media over his bringing California back from financial collapse while growing the state’s economy into the world’s fifth largest.

These are major achievements, not to be denied, but neither can anyone deny the fact he has at least tolerated corruption and unfairness from his appointees to the state’s most powerful regulatory commissions.

The outgoing governor’s naivete toward his favored officials has been staggering, and a recent veto message from him demonstrates the unsuspecting trust he continues to give them.

Brown, for example, knew the unfairness of the grant-giving practices of the state Energy Commission as it doled out multi-million-dollar grants for building hydrogen refueling stations around the state while preparing for use of H2-powered cars whose exhaust is nothing but drops of water. No greenhouse gases at all.

Building the stations with gasoline tax money was a worthy project, but at one point that commission had to pull back $28 million in grants because this column exposed the sheer unfairness of its grant-giving process. Later, the commission refused to cancel a large grant to an outfit whose leader had trained the commission’s own staff in how to evaluate grant applications – and then just three months later submitted one that fit all criteria he had trained staff to look for.

Brown knew about these plainly unjustified actions, but did nothing and in fact reappointed the commission’s chairman, Robert Weisenmiller.

His actions toward the even more powerful state Public Utilities Commission (PUC) have been similar. When the commission’s former president, Michael Peevey, met secretly with utility executives to hash out a clandestine deal sticking consumers with most costs for the failure of the San Onofre Nuclear Generating Station, Brown did not object and let Peevey serve out his term.

Then he appointed his former aide Michael Picker, who voted for that corrupt San Onofre settlement as one of his first acts on the commission, to replace Peevey. As The Who once sang, “Meet the new boss, same as the old boss.”

Brown’s veto message called the bill “premature.” He noted that the PUC already can exclude customers with “onsite generation” when it figures average consumption.

Said Brown, “The commission will determine whether or not to exclude customers with onsite generation through the general rate case process…I believe the commission will act to ensure that energy costs to ratepayers are fair and equitable.”

That’s about as naïve a statement as anyone could make about energy price regulation in this state, which has the highest electric rates in the Lower 48 states, and features utility companies continually pressing for even more profits.

It’s a fairy tale to believe the PUC’s processes are fair and equitable. Rather, they have been stacked in favor of utilities for more than half a century, with some PUC members moving to big utility company jobs and some utility executives, like Peevey, moving onto the commission.

The general rate case process cited so trustingly by Brown has also long been as good as fixed. Utilities invariably request larger-than-needed rate increases even when profits are historically high, all the while knowing the PUC will cut their proposals by about half and then brag about “saving” money for consumers.

So there’s every reason to believe the PUC will conspire with utilities that hate the idea of rooftop solar to penalize those who install it. It’s simply naïve to think otherwise, as Brown plainly does.

The bottom line: There’s no disputing the constructive aspects of Brown’s second eight years as governor. But there’s also no doubt about the unfair practices and actions he’s tolerated and/or approved.