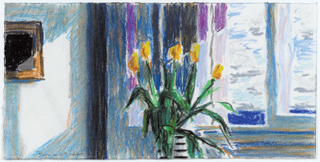 The Leslie Sacks Gallery was host to Bruce Cohen for an opening reception titled, “Studies,” Saturday, June 9. The artworks featured in the exhibition included still life vistas, home interiors, and other familiar scenes.

Inside the gallery Cohen’s pastel artwork lined the walls. According to the artist, his work is “constructed from an amalgamation of memories and observations.” The picturesque drawings span from 2004 to 2018. Cohen, who studied at the College of Creative Studies at University of California Santa Barbara said that, “drawing is the fundamental way you learn to see… and is arguably the most important skill as a visual artist.” His work is evocative of Odilon Redon, Edgar Degas and Eduoard Vuillard, artists that all worked with pastels.

Attending the event was Cal State Los Angeles professor Raphael Sonenshein, who was present with his wife and daughter. His daughter Anna explained that her best friend was the daughter of the artist. “I like the ones that have bits of their house in it, it’s basically a house that I grew up in,” Anna said; she has known Cohen for nearly 22 years.

“The drawings presented in this exhibition are an instrumental part of Cohen’s process, providing rare insight into the development of his oil paintings,” exhibit curators said.

While all the artwork featured was thematically linked by its focus on interiors, the standout piece was the artist’s 2018, “Interior with Halved Peach,” an oil on canvass painting that measured 54 x 36 inches.

“I have always adored his pastel work having been gifted one by him a couple of years back (it hangs on the wall next to my desk),” said Temma Nanas, director of the Leslie Sacks Gallery. “About a year ago I was visiting Bruce in his studio when he opened a flat file drawer revealing a handful of these pastel studies… Seeing them in that moment I immediately said, ‘We must have a show of these!’ It took a little coaxing on my part as these are very personal works for Bruce and he does not let them out for the world to see. But I think it’s important to share this part of his mind and process in order to illuminate a more complete picture of the artist.” The exhibition is on display until July 28. For more information, visit: www.lesliesacks.com.