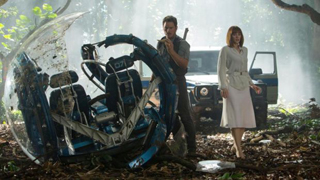 What drives our fascination with dinosaurs? I am writing this from Denali National Park in Alaska where I’m spending the weekend. Yesterday our guide in the park pointed to a jagged reddish side mountainside. There, he noted, some 13 years ago, a biology professor was leading a group of students on a tour of Denali’s present and past animal inhabitants. The professor was noting that no evidence of dinosaur fossils had ever been found in Denali. One student pointed to an imprint on a rock in the background and said, “would it look like that?” It turned out to be the imprint of a dinosaur bone. Our guide continued that over the next few years, one area in the park was found to have so many dinosaur footprints it has become known as the “Dinosaur Dance Floor.” In that moment I experienced firsthand the awe of being in the very place where a bygone world of giant creatures had existed, a world that we can only imagine, that has left behind real evidence.

The Jurassic World franchise follows a story originated by the great writer Michael Crichton about the recreation of a world of dinosaurs for the entertainment and enjoyment of modern humans. The stories cover the moral dilemma and dangers of this concept. We follow a band of dino wranglers and scientists charged with making this world work, against the backdrop of human greed.

The film is compelling though most of the human characters are simplistic. The sweeping views of Jurassic World Island (performed by islands in Hawaii) are gorgeous and set the tone, although the music is too loud and overdramatic to the point of being disturbing. The viewer’s role is reversed – you will identify with the dinosaurs. One actor whose performance brings an aura of mystery is Geraldine Chaplin, Charlie Chaplin’s daughter, as “Iris.” Dallas Bryce Howard as “Claire” is able to run better in heavy black boots than the spike heels worn in the 2015 Jurassic World – still kind of heavy footwear for a good 50 yard dash though. I would have liked more development for the young granddaughter, “Maisie,” played by newcomer Isabella Sermon. Justice Smith and Daniella Pineda add interest to the science team – again we need to know them better. It’s the CGI dinosaurs that will draw you into the narrative. Chris Pratt’s relationship with the dinosaur “Blue” steals the show. I’m not sure if Pratt reflects Blue’s personality or vice versa, but it works. They seem to have the same expressions, the same body language, much like a human with a beloved dog.

The age of dinosaurs is something mysterious to us – a world of which we have scientific knowledge and yet a world that none of us has experienced in real life. See this movie and explore an unknown world of compelling creatures that we can recreate from the clues they left behind for us.