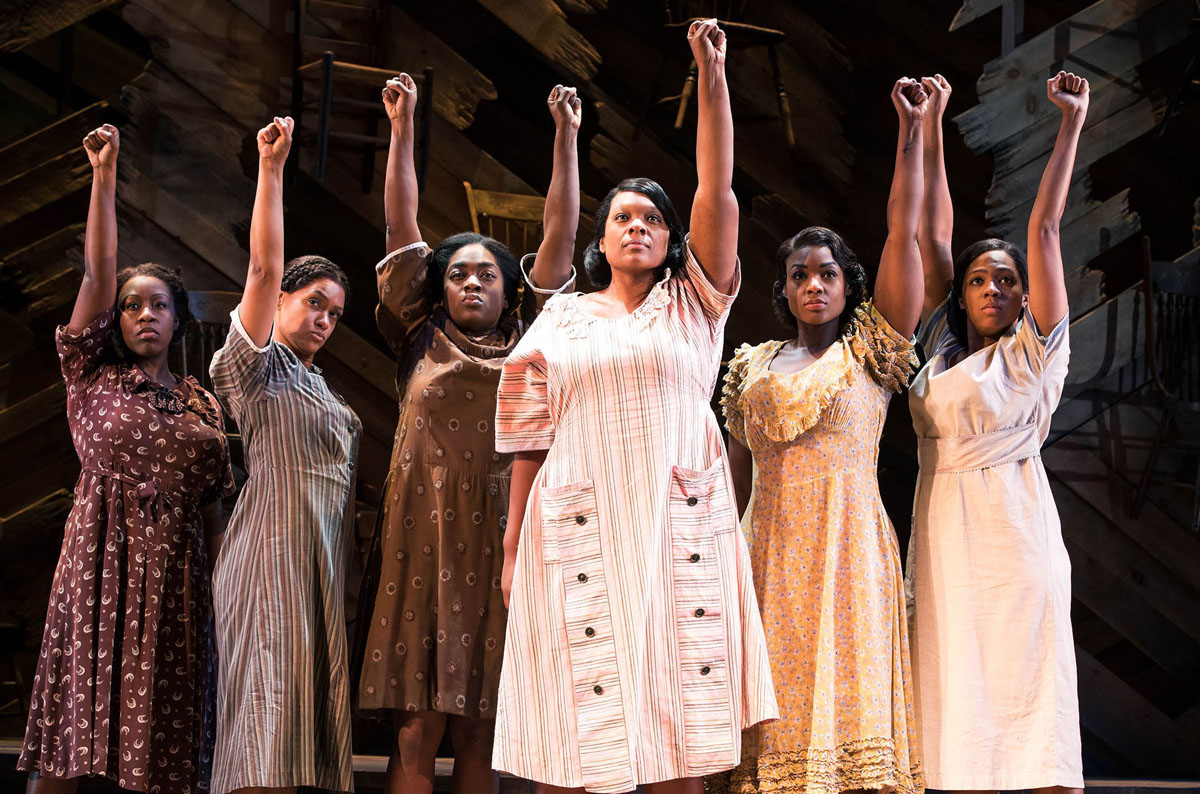 I was excited about seeing the L.A. Premiere of the Tony Award-winning Broadway revival of “The Color Purple”. Based on Alice Walker’s Pulitzer Prize-winning novel, and the 1985 Warner Brothers film, this is the play that was nominated for 11 Tony Awards, winning two, including Best Revival of a Musical, and two Drama Desk Awards for Outstanding Revival of a Musical. It ran on Broadway for 483 performances, closing January 2017. Sadly, what unfolded on stage opening night at the Pantages Theatre was a far cry from that award-winning production.

Adapted for the stage by Tony and Pulitzer Prize-winner Marsha Norman, with music and lyrics by Brenda Russell, Allee Willis and Stephen Bray, the Tony Award-winning director and scenic designer John Doyle attempted to recreate the splendor and excellence of his original work for the national touring company, but failed to reach that goal. What is particularly perplexing is that Doyle used some of the original cast members from the Broadway revival including, Adrianna Hicks as Celie, Carla R. Stewart as Shug Avery, and Carrie Compere as Sofia, with other lead roles played by Gavin Gregory as Mister, N’Jameh Camara as Nettie, and J. Daughtry as Harpo. Visually enhanced by Ann Hould-Ward’s costumes, Jane Cox’s lighting, and Dan Moses Schreier’s sound design, the leads are seasoned Broadway performers, which makes what unfolded on stage even more head scratching.

There is no inherent problem with the wonderful musical score or with Norman’s book. True to the original story line, it revolves around Celie, a young black girl living in rural Georgia in the early 1900s. Like most women of that time, she was beaten regularly and was sexually abused by her father, who impregnated her twice. He immediately disposed of the babies so she could work. Eventually, she is married off to Mister, another violent man who treats her like a slave. Her life’s experience taught her that it’s perfectly acceptable to be beaten by men. Along the way, her sister Nettie disappears and eventually is discovered in Act II living in Africa teaching women how to write and taking care of Celie’s two banished children, Alan and Olive, who meet their mother for the first time as adults. Her husband has a “come to Jesus” revelation and tries unsuccessfully to win back the “new,” independent Celie, but to no avail.

But I digress, so back to the beginning. Jump starting her transformation, Celie meets Shug Avery, an independent bar singer with loose morals but a staunch feminist who encourages Celie to stand up for herself and change her life. The storyline, though a bit predictable, reveals Celie evolving from being treated like an animal to becoming a strong, beautiful woman with a fulfilling life of her own. Shug is sexy and sings “Too Beautiful for Words,” “The Color Purple” and the sexually explicit “Push da Button.” Therein lies one of the major problems with this production and that is the poor vocal execution of the musical score, which incorporates jazz, gospel, ragtime, and blues. From the opening number, “Huckleberry Pie,” sung by Celie and her sister Nettie, it was almost impossible to understand the lyrics and Hicks’ voice came off nasally and strident. She didn’t do a heck of a lot better with the dialogue, which she muddied throughout the play. The lack of vocal clarity with both the dialogue and lyrics permeated the entire cast, although some of the ensemble pieces fared slightly better such as “Hell No!” sung by Sofia and the women. Granted, there was a certain vernacular in the regional speech during that era, but it’s the director’s responsibility to insure that the dialogue is delivered with clarity, no matter what the accent or current language mores might be.

You know the old saw that “the buck stops here.” So, the failure of this production, which never rose to a highly professional level, must be assigned to director Doyle. Beside the problem of the lack of vocal clarity, he is responsible for the lackluster set, which consisted of a truckload of chairs hung on the back wall. The actors turned the chairs into an assortment of props, some of which made sense, while at other times, there wasn’t much meaning to their actions, which they executed by rote. Some of the actors struggled mounting and dismounting from the chairs, which were used over and over again to stand on during some of the musical numbers. With regard to basic stagecraft, a lot of the director’s blocking was unimaginative, frequently positioning the actors in straight lines. Their entrances and exits reminded one of the walking dead in their slow movements. You can’t fault them as they were doing what they were directed to do, but there was no intrinsic purpose to that recurring blocking other than to get the ensemble on and off stage. Other members of this hard-working cast include, Darnell Abraham, Amar Atkins, Kyle E. Baird, Angela Birchett, Jared Dixon, Erica Durham, Bianca Horn, Gabrielle Reid, C.E. Smith, Clyde Voce, Nyla Watson, J.D. Webster, Brit West, Nikisha Williams and Michael Wordly.

Let’s face it. Basically, everything on stage is a “theatrical contrivance,” but properly executed it should be organic, believable, and most importantly, communicated clearly to the audience. The overarching technical problems in this production are fixable, so let’s hope the director corrects the flaws before heading to the Costa Mesa at Segerstrom Center for the Arts for a one-week engagement – June 19 to June 24. It’s worth salvaging such an iconic piece of theatre.