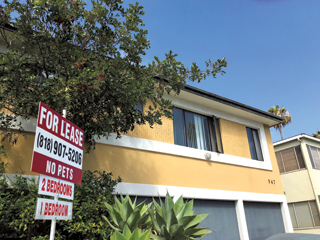 Possible repeal of Costa-Hawkins Act could roll back rents to 1978 rates.

The 1995 Costa-Hawkins Rental Housing Act is a California law that limits cities’ ability to impose rent control. Santa Monica is one of 15 cities in the state with rent control policies that are curtailed by this act. A statewide initiative on the 2018 ballot, however, seeks to repeal the Costa-Hawkins Act. If voters approve this repeal, rents in Santa Monica will be rolled back to 1978 rates.

“Passing the initiative might be a very good thing, but there might be collateral damage in Santa Monica that we need to be prepared for,” said Councilmember Kevin McKeown during a regular Santa Monica City Council meeting, Tuesday June 26. “If this repeal of Costa Hawkins were to pass it would mean the rents on units in Santa Monica that were raised to market under the Costa Hawkins law over these years would all of a sudden be subject to our local rent control which says that rents are based on what the rental was in the year 1978.”

During the meeting Santa Monica City Council directed City Staff to draft an amendment to the City’s charter that would prevent a rollback of rents to 1978 base rates. This charter amendment would be put before voters in the 2018 election. City Council has given City Staff 30 days to report back and with possible charter amendments; stressing the urgency of having a fix in place should Costa-Hawkins be repealed.

“We can’t move again on this because the rent control laws are embedded in our Charter for two more years if we miss the 2018 Ballot,” said Councilmember Sue Himmelrich.

The ballot initiative would be structured in a way that would void the results if the Costa-Hawkins repeal fails.

Some property owners and stakeholders in the City, however, are concerned that a potential change to the City’s charter might negatively impact the local real estate market.

“The charter is the constitution of our City. And the charter says very carefully and very specifically in matters of rent control, the rent control board shall promote laws and changes. Not the City Council, not the City Manager and not the City Attorney,”  said Rosario Perry an attorney with  Action Apartment Association. “Anything you do is going to excite the market, it is going to rush people to do things they don’t want really want to do such as Ellising their building.”

Some stakeholders urged the Council to address the potential rent rollbacks with an administrative fix rather than a ballot initiative, to avoid potential uncertainty in the housing market. This could be done by the Santa Monica Rent Control Board approving a regulation that would establish a more recent base rent date that rents would roll back to.

“The general counsel and the rent control board has confirmed that he does believe an administrative fix is available should Costa Hawkins repeal pass,” said City Attorney Lane Dilg.

Tracy Condon, Executive Director of the Santa Monica Rent Control Board, confirmed that the Board has the authority to create a regulatory fix but said that a Charter amendment would be a more secure fix.

“We have looked again at the charter and feel that potentially there would be an administrative fix with a regulation that would establish the base rent date,” Condon said. “I think a charter amendment is a more secure fix and would be preferable but I think if the Costa Hawkins act is repealed the board would most likely choose to enact a regulation to address the base rent question.”

Councilmember McKeown initially proposed including a provision in the measure that would have levied a tax on landlords whose rents were “far beyond what it would take for a fair return,” to fund affordable housing in the City. Landlords and other Councilmembers expressed concern that this could have unforeseen consequences on Santa Monica’s housing market.

“What would be the effect of development of new rental housing?” asked Mayor Pro Tem Gleam Davis. “We did have some property owners tells us that they are either trying to sell or possibly would sell. I would hate it if we adopted these measures and the unintended consequence would be for people to start selling their rental properties and converting them into condominiums.”

Therefore, City Council passed a separate motion that directs staff to look into this possible tax and any other ideas they might have to find more affordable housing, but gives them until after the election in November to do so.