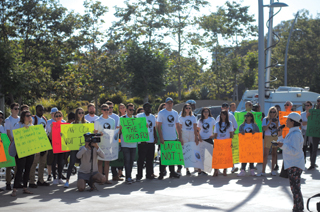 Electric scooters are here stay, at least for the time being.

On Tuesday night, June 12, in front of a packed council chamber, Santa Monica City Council unanimously approved a 16-month pilot program that will allow dockless, shared mobility rental companies like Bird and Lime to continue operating in the city.

“There’s no denying the popularity and ease of shared mobility devices that can help Santa Monica reach its goal of being a multimodal city,” said Santa Monica Mayor Ted Winterer. “This pilot approach will allow us to understand usage and operations in order to create a long-term program that establishes a safe, equitable and sustainable mobility option in Santa Monica.”

The pilot program, which will begin September 17, establishes a dynamic cap on the number of devices a company can have. Operators can exceed the cap if they can show that each device is being used at least three times a day. It still unclear how many devices operators will be allowed to deploy once the program begins. Electric scooter and bike rental companies celebrated the decision, as the council members rejected a proposal by city staffers that had called for an initial cap of 1,500 total scooters for the entire city.

“We applaud the City of Santa Monica for formally embracing innovative transportation, and look forward to collaborating with them as they work to further establish regulations around an environmentally-clean, shared mobility program for scooters,” wrote Lime Spokesperson Mary Caroline Pruitt in a statement.

The program will permit up to four rental companies – two electric scooter services and two electric bike services – to operate in the city. Operators will be chosen through an open application process that begins in July. In addition to creating a dynamic cap, the program levies fees on vendors and requires them to increase the safety of devices by educating riders, share real-time utilization data with the City, ensure fair and equal distribution of devices while instructing operators to develop a system that will remedy improper parking.

Last week, City Staff presented City Council a proposal to cap the number of devices in the city to 500 per operator and 1,500 total and on Tuesday evening, some of these staffers encouraged council members to adopt this cap.

“To avoid oversupply, we are recommending a flexible cap that would start at 250 per operator and go up to 500 per operator,” said Francie Stefan, Mobility Manager for the City of Santa Monica.

Mayor Pro Tem Gleam Davis and Councilmember Terry O’Day voiced concern that the cap may lead to an unequal distribution of scooters, as providers would be encouraged to put devices only in high-density areas.

“Why have a cap at all? What’s the purpose?” O’Day said. “The cap as I heard it was too low in the staff recommendations.”

Davis also expressed concern that a hard cap would be a potentially fruitless effort in Santa Monica. Bird and Lime devices are popular in many areas like Westwood and Venice that border Santa Monica but are not part of the city’s jurisdiction. Operators could flood these areas with devices and Santa Monica could do nothing to prevent riders from taking them into the city.

“What happens when people ride into Santa Monica from Venice or West Los Angeles or Pacific Palisades? I’ve seen scooters in all three places. Do we put up a wall and say ‘I’m sorry that’s scooter number 250, you can’t come in’? I don’t understand how we enforce a cap on a mobility item,” Davis said.

A rally organized by Bird prior to the event also featured stakeholders voicing opposition to the cap proposed by city staff. David Estrada, Chief Legal Officer for Bird, argued that capping the number of devices in the city was environmentally irresponsible.

“Why are we here capping the solution rather than the problem?” Estrada said during the rally. “Bird can help Santa Monica leaders meet their audacious goal of reducing car trips to achieve full carbon neutrality if the City Council votes against the proposal.”

More than 30 members of the public spoke at the Council meeting and while many residents voiced their contempt towards these scooters, most speakers expressed support for the devices and opposition towards any cap.

“I oppose the cap on the number of scooters. The ubiquity of the scooters maximizes their utility,” said Santa Monica resident Chad Billmyer at the meeting. “A cap only serves to squash the usefulness, reliability and transportation breakthrough that scooters provide.”

While City Council rejected the cap proposal, they did approve a staff recommendation to levy fees on device operators. Each company selected will have to pay a base operator fee of 20,000 dollars plus a per device fee of $130. These funds will pay for two full-time employees approved by City Council, one program coordinator and one enforcement liaison.

“The cost is not born to the City or the public….this would fund a program coordinator and an enforcement liaison necessary to create the system to facilitate these devices operating,” Stefan said. “This also compensates the public for use of public land for commercial purposes.”

The fees were approved unanimously but in the Council meeting, Councilmember O’Day asked Stefan if similar fees are levied on the Breeze Hulu bikes.  Stephan said that the city does not currently levy a fee on Breeze. In response, O’Day questioned the fairness of the fee.

“Everyone else has to pay for it but the City’s service doesn’t?” O’Day said.

The council’s decision was applauded by enthusiasts of the scooters. Mike Matzke, who has ridden a Bird scooter every weekend for the past two months, says the dynamic cap is in line with the principals the United States is founded on.

“I personally like the deregulation. I think that kind of freedom is kind of what we are founded on as a country,” Matzke said. “As long as the riders have a conscious about the place they put the scooters not blocking the sidewalks, I don’t think it should be a problem.”