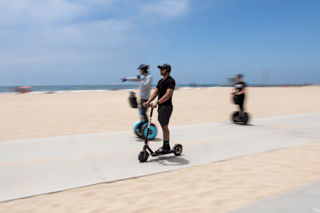 Although some changes to Santa Monica’s cityscape may go unnoticed, there is one that is hard to miss – the electric scooters taking over our neighborhoods. The “Birds” were the first to roost but were joined with a twist of “Lime” as more were added to the mix on our City’s streets, sidewalks, bike paths… and sometimes our front yards. Their use is likely to increase this summer as visitors use them to avoid traffic and the search for parking. Perhaps commuters are also hopping on for a short ride to or from the Metro. It is still an open question as to which demographic is getting the most benefit from this new mobility option – visitors or residents.

While there has been an effort to address their negative impacts, it is apparent that more regulations, and enforcement, are needed. Between Jan. 1 and March 10, 2018, the Santa Monica Police Department made 575 traffic stops involving electric scooters and issued 273 traffic tickets. If our City manager’s estimates that only 2 percent of the actual violations are being ticketed, the real number of violations could be over 25,000. There have already had nine accidents, including one serious crash where a Bird rider ran a stop sign and was hit by a car. In the interest of safety for both riders and pedestrians, the City must start enforcing the laws that are on the books and, if necessary, write new ones. In the meantime, a greater number of those that break these laws must be cited.

One needs look no further than our beach bike path to see the extent of the problem. For a start, scooters are not allowed on the bike path. That is hard to believe given the number of them using it with impunity. Here is a sampling of other violations I have noticed: 1) more than one rider to a scooter, 2) no helmets; 3) underage riders (16 yrs. min.); 4) no driver’s license (class C required); 5) riding in prohibited areas (i.e. bike path and sidewalks); 5) speed limit violations (15 MPH max.); and, 6) scooters randomly left on the beach, sidewalks and private property, often overturned. This is unacceptable. While the City may be aware of these problems, and be moving to correct them, it is doing so too slowly and inconsistently and the bike path would be a good place to start.

To the City’s credit, they are considering measures to reduce the total number of scooters in the City from current levels to below 2,000 total. This amount would be divided amongst a small number of City sanctioned companies (3 to 4?) with perhaps no more than 500 to 600 each. This would result in a substantial reduction from current levels. It will be interesting to see if this “bird” can be put back in its cage. Based on their late start to regulate numbers and enforce violations, it won’t be easy.

Currently, the problems associated with both the Bird and Lime scooters are out of control and on the rise. One could argue that this is due as much to the lack of enforcement as it is to the ambiguity around the applicable rules. As this debate drags on, the numbers of scooters on our streets, bike paths and sidewalks continue to rise along with their associated problems. This will only stop when the City begins to enforce our laws consistently and levy fines against those who disobey them. If only 2 percent of violations are currently being cited, we might be better off not enforcing the laws rather than making a mockery of them, as is currently the case.

There are a few other issues that can be addressed in the meantime. As is the case for all vehicles, electric scooters should be required to have license plates to identify them in the event of an accident. Secondly, the City needs to designate specific parking areas for all scooters. These last months have shown that the “laissez faire” attitude towards this issue is not working. One solution would be to create “corals” by repurposing selected parking spaces on our streets. Another would be to install scooter racks similar in concept to those for the Breeze Bikes. In either case, something needs to be done. The current state of affairs is untenable.

While technology is evolving at a frantic pace, governments still seem to move glacially. Perhaps if this issue had been addressed sooner, it would have been easier to resolve than it is at this late date. The City must get ahead of these new technologies by anticipating the potential impacts before they become an intractable crisis. In the future our City needs to be more nimble and proactive, not reactive. This problem is an opportunity for them to demonstrate how they can meet today’s challenges, both after the fact, and hopefully in the future before it is too late.