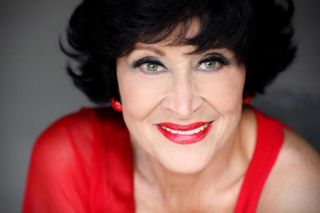 We were thrilled to attend the Share Boomtown show at the Beverly Hilton, where over $1 million was raised to help  Los Angeles based children’s charities. The event was headlined by The Righteous Brothers and Martha and the Vandellas – and time has not withered the smashing style of these legends. The Shining Spirit Award was presented to Loreen Arbus for her foundation, which supports racial and gender minorities; and provides medical research for those with disabilities. As Feminist Attorney Gloria Allred stated: “Loreen is a Crusader for the marginalized.”

There was a special tribute to founding member, Miriam Nelson, who, at 99 years of age, strode on stage to accept her award. These dancing cowgirls never seem to change! Of course the highlight of the evening were the high-steppin Share ladies who performed “I’m So Excited” and “Tap Your Troubles Away” and that is exactly what we did at this terrific evening in Tinseltown.

The Associates for Breast and Prostate Cancer held their Annual star-studded luncheon at the Four Seasons in Beverly Hills. TV and radio personality, Dr. Drew Pinsky was named Father of the Year; and fashion designer/author Rachel Zoe was named Mother of the Year for her commitment to find a cure for cancer. Rachel, who was introduced by her handsome hubby of 20 years stated: “I will always fight the fight with all of you!’

Kudos to ABC President Gloria Gebia, who presented the Woman of Achievement Award to Mercedes Javid, who stars in Bravo’s hit series “Shahs of Sunset”.  She takes an active part in numerous charities including Stand Up for Cancer, Babes for Boobs and LGBTQ support.

And last, but not least, spent a delightful Evening on Broadway at the Wallis Theatre with Broadway Baby Chita Rivera. This versatile and accomplished performer’s resume includes leading roles in such hits as “Bye Bye Birdie,” “Kiss of the Spider Woman,” “Chicago” and “West Side Story” to name a few. She was honored to be the first Hispanic woman to receive the prestigious Kennedy Award.

In addition to performing songs from a mélange of Broadway hits, Chita was interviewed by her fab accompanist, Seth Rudetsky (Sirius/XM) and reminisced about her life in the theatre and the greats she worked with – including Leonard Bernstein. An extraordinary woman who led an extraordinary life on stage and off!