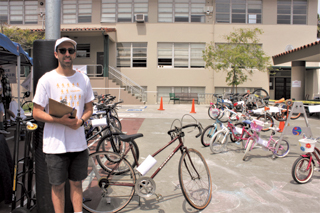 Saturday May 19 the City of Santa Monica, along with Climate Action Santa Monica and Beautify Earth presented ClimateFest. The event began with a morning bicycle ride with the Mayor and concluded with a networking social hour. Throughout the day workshops, presentations and showcases were presented by individuals and participating organizations.

ClimateFest 2018 was hosted at St. Monica Catholic Community, just north of Wilshire Boulevard. A clean vehicle ride-and-drive, a bicycle valet and a solar powered electric vehicle charger were positioned at the entranceway of the event. Paul Scott, a member of the grassroots organization Drive Clean Santa Monica, brought his Zero SR electric motorcycle to the event. “I can go from zero to 60 miles per hour in three seconds flat” he stated, adding he could travel “110 miles on a single charge.” Scott explained that Drive Clean Santa Monica was formed to expand the amount of electric vehicle supply equipment stations within the City of Santa Monica.

Santa Monica High School Student Cameron Williams shared his project, a proposal for a bottle refill station. His belief is that by installing a water refill station on campus that “students will respect the environment more and use reusable metal water bottles.” He cited that, “the price of a water bottle on campus is one dollar, and if you buy two of them a day, [in a month] that’s 60 dollars.” Alternatives to plastic water bottles that he suggests are a “clean canteen, or a hydro flask.” Williams cited that water bottle stations cost between 700 and 850 dollars per station.

A family of three, Iris, Eddy and Haley, bicycled to the event. Through GoSamo, the family traded in their daughter’s Minnie Mouse bicycle that she “had outgrown.” Puja, a representative from GoSaMo stated that “we provide assistance to help people make sustainable transportation plans.”

In addition to water and transportation, food was also part of the festival. Amy Sullivan, who was at the sustainable cooking booth, stated “our goal today is to inspire and show people a couple of quick delicious, easy ways to incorporate plants into your diet.” She provided live cooking demonstrations and shares recipes via Instagram, @aliengyrlz.