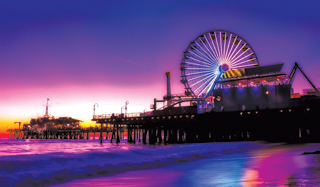 Santa Monica’s iconic Ferris wheel spearheaded a day of celebrations Thursday, June, 21, as the invention of the Ferris wheel itself marked its 125th birthday.

“This was a terrific celebration and excellent partnership with Chicago’s Navy Pier as we joined together to celebrate the 125th anniversary of the iconic invention that connects us both: The Ferris wheel,” explained Nathan Smithson, Marketing and Business Development Manager at Pacific Park on the Santa Monica Pier.

The Ferris wheel was designed and constructed by George Washington Gale Ferris Jr. for the World’s Columbian Exposition in Chicago on June 21, 1893. One hundred and twenty-five years later, Chicago, home of the original Ferris Wheel, and Santa Monica, home of the world’s only solar-powered Ferris Wheel, teamed up to honor the ingenuity and foresight of the late George Ferris Jr.’s creation.

“Today, the Ferris wheel has a nostalgic appeal and most people have tremendously fond memories of their rides on a Ferris wheel,” Smithson said. “This was a great opportunity for people to enjoy a truly American achievement.” Pacific Park offered 1,893 free rides in acknowledgement of the wheel’s year of birth.

Smithson said that there is something truly authentic about riding a Ferris wheel; the appeal drawing young and old, and adding a romantic appeal to many. The wheel has been listed as one of the most romantic places in Los Angeles.

In true Santa Monica-style, the Pier’s Ferris wheel is the world’s first and only solar-powered Wheel. “The eco-friendly, enhanced 174,000 LED lights provide 81 percent greater energy savings than most Ferris wheel’s traditional incandescent bulbs. Its green history and reputation continues to be an inspiration to others worldwide and here at home,” Smithson added.

The celebration, falling on Summer Solstice also set the scene for an entertaining summer season at Pacific Park.

“We’ll host thousands of guests throughout the summer and then we have an exciting national competition taking place at Pacific Park in October that we’ll be sharing all the details in the coming weeks. We will also be celebrating the 20th Anniversary of the Ferris wheel’s solar-power application in November. And, then, of course we move right into the holiday festivities,” Smithson said.