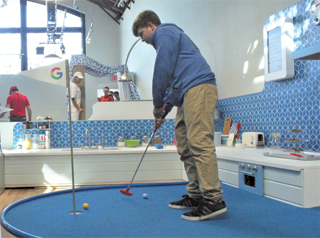 Google popped up in Santa Monica this weeekend. The search engine giant, known for its mapping system, email and cloud storage appeared on the Third Street Promenade to introduce people to its new hardware technology, Google Home. Saturday June 30, people traveled from across the southland to check out the new technology which was introduced through an interactive round of mini golf.

“The Google pop-up in Los Angeles is a way to experience Google Home with the use of Google Assistant,” explained Pepe Xicohtencatl, a media correspondent for Google. “There are three different devices on display, Google Home, Google Home Mini and the larger Google Home Max.”

Upon entering the pop up Saturday, attendees were provided with golf clubs, a score card and a colorful ball. Each hole of Google’s mini golf experience focused on a different aspect of the technology’s capabilities. “Turn on a light using your voice on the first hole, or a TV on the second, you can even ask Google Assistant to start a fan,” said Xicohtencatl. Golfers could be heard throughout the golf course speaking to the devices at the start of each hole by calling out, “Hey Google!”

While some noticed the pop-up while walking down the promenade, others found out about the event through Facebook, and few had watched a video about the mini golf course on Google’s blog. Outside of the building, couples, trios and quartets waited for their chance to face off in a round of mini golf. Sam, Sarah and Ilani were visiting from Fort Lauderdale. “We really wanted to see the sunset and we just decided to do everything we can around the area; and we just walked down this street and it’s kind of a busy nice street to be on,” said Sam. The trio had just finished their round of golf and were walking out with their complimentary Google socks, a parting gift for those that completed the course.

Friends Hasan and Mike had traveled from Pasadena and Downtown Los Angeles to the pop-up and were excited about playing a round against each other. “I saw some pictures online and it looks like it was set up pretty well” stated Hasan. “And I just came to beat him,” stated Mike with a smile, “I beat him in Topgolf already, and now I need to be him in a different kind of golf.”

After a run a six day run, the Google Home Mini Golf course closed on July 5. The next city on it will pop-up in will be Atlanta Georgia from July 26 through July 29. In addition to Santa Monica, New York And Chicago also hosted the larger than life course.