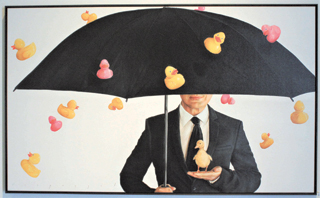 Saturday, July 21, Bergamot was a flurry of sights and sounds as the third annual Summer Celebration brought together artists, art lovers, foodies, and Santa Monica residents. Organized by Diana McNeill, the event has grown over the years as artists have made use of the art space with performances, lectures, and pop-ups. The Summer Celebration is one of several complex-wide events hosted throughout the year, this year included dance, music, and a Biergarten.

“We were so thrilled by our visitor’s engagement with the exhibitions this year. Countless guests commented on the artworks being exhibited and showed true interest in our arts programming. Other notable highlights were the Peruvian and Bollywood dancers and singers, a photo booth with fun props and costumes, cocktail lounges and a special theater performance,” McNeill said. In previous years, People’s Park was the hub for musical performances, however, this year the music was relocated.

“We debuted our first ever Biergarten at the Bergamot Café, which was definitely the most popular special event (outside of our exhibitions and artist talks). The live music, brats on the grill and craft brews from Santa Monica Brew Works was a winning combination,” McNeill explained.

Brother and sister duo Daniel and Sarah Pappas (The Hot Potatoes), as well as the Friends of the Venice Symphony Orchestra (VSO) returned to perform for attendees.

“This year felt like the most seamless event to date,” McNeill added. “I believe that’s partly due to experience, but I was also supported by our management, Worthe Real Estate Group and I’m very grateful to them.”

Inside the galleries, various art talks were hosted throughout the afternoon. Executive Director William J. Sheehy of the Latin American Masters gallery spoke extensively about the detail within Francisco Toledo’s numerous etchings.

“We try to separate ourselves, but we’re not separate, it’s all part of the same life-force, it’s all connected; underneath everything else that [Toledo is] doing with these incredible lines, it is always about connecting the world,” Sheehy said of the 1970 etching titled “Vaca”.

Sheehy explained that that the artist used a wide variety of materials in his prints, sculptures and ceramics including gold, mica, silver. In addition to the “Vaca” (cow), works by Toledo included a crocodile as well as monkeys.

While some galleries, such as Building Bridges Art Exchange, the Peter Fetterman Gallery and Skidmore Contemporary Art hosted art talks, other curators used the Summer Celebration as an outreach platform for coming events. Santa Monica Auctions hosted a preview of their fall auction along with a cocktail longue. Robert Berman told The Mirror, “We sort of scampered to put together our next big auction, which is going to be held October 7.” Berman began business in Santa Monica back in 1979 and has exhibited artists such as Keith Haring and Raymond Pettibon.

“I’ll be honest with you, [there are] a lot more people coming now, everybody thought that Bergamot was totally over but it looks like we’re having a rebirth,” Berman said.

Saturday, September 8, will be Bergamot’s next complex-wide event, the Fall Open.