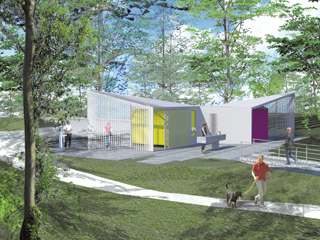 The City of Santa Monica is on schedule to build new restrooms at Clover Park at a $2.3 million price tag; while park patrons support replacing the facilities, most are questioning the cost.

“It’s obvious that those restrooms need to be replaced,” said Santa Monica resident Zina Josephs at the June 12 City Council meeting in which the project was approved. “However I don’t understand why it would cost $2.3 million to replace the restrooms.”

City officials say that the cost is an investment that will yield a facility that is accessible, safe, durable and environmentally sustainable. Clover Park is one of the busiest parks in Santa Monica and these bathrooms will be built to withstand heavy use.

“The design life of these is probably 30 years,” said Santa Monica City Manager Rick Cole at the June 12 City Council meeting. “These will take a horrific beating over the next 30 years so they are really designed to be industrial strength so that we keep to a minimum the replacement costs and the maintenance costs.”

According to the City, the $2.3 million price tag includes a contingency, the cost of tearing down the existing restrooms and replacing them with two restrooms containing 10 total stalls. One restroom will be 1,188 square feet and contain six stalls and the other will be 492 square feet with four stalls. The City says they will be built with “high-quality materials” including exterior glazed concrete masonry and fiberglass doors that hold up against graffiti.

“Santa Monica does build differently,” said Constance Farrell, the Public Information Officer for the City. “As a coastal community, we also have to use materials that can stand the test of time, adding costs for materials like steel and perforated aluminum.”

The City says that because of the heavy use public restrooms get in Santa Monica, it is not useful to compare construction costs to other cities. In 2011, however, the City constructed eight restrooms on Ocean Front Walk for around one million dollars, roughly $125,000 per restroom. The Clover Park restrooms will cost roughly $230,000 each. Public Works Director Susan Cline says that this increase can be attributed to rising construction costs.

“Construction costs are rising and they are not indicating any type of downward trend at all,” Cline said.

Also driving up costs is the nature of municipal construction in general. Per state law, the City has to pay prevailing wages, which according to the City Manager’s Office, increase construction costs by one-third. In addition, the City must follow insurance requirements that go beyond what is required for private projects.

“I don’t think anybody on staff is happy about these costs,” City Manager Rick Cole said at the Council meeting. “[But] it’s costly to do business in the public arena. Would we like to hire someone’s uncle and pay them minimum wage by getting people at Home Depot? If we could do that legally there are probably people in the community who would think that would be swell. But it’s not legal and it’s probably not responsible given what we are doing.”

“It is a fairly standard project,” said Councilmember Sue Himmelrich. “Are we looking at prefabs and other alternatives to building from the ground up?”

The City says, however, that the life expectancy of a prefabricated restroom is only 10 to 15 years.

“The additional $700,000 in cost to construct the Clover Park restroom as designed will benefit Santa Monica long term,” Farrell said.