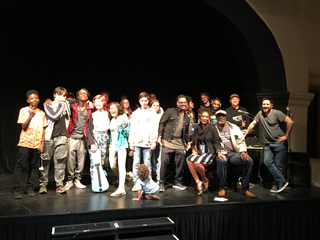 A space for the youth of Santa Monica to find their voice.

Sharky’s Woodfired Mexican Grill. 2001. Two-time HBO Def Poet and Emmy Award-Winner Joe Hernández-Kolski and actress Ameenah Kaplan join forces to create an artistic space for the youth of Santa Monica. Born out of their collaboration is Downbeat 720 (summarily referred to as Downbeat), an open-mic for local high school students. Sixteen years later and today Downbeat is as vibrant as ever.

I watch from the second row as Hernández-Kolski, award-winning comic and Downbeat co-host Joshua Silverstein, and Emmy-award winning turntablist Terence Fredricks (aka Dj Jedi) kick off the evening with improvised beatboxing, mixing, and a challenge: tonight, every performance must be backed by Eddie (piano), Aidan (drums), and Elliot Rick (saxophone) – the resident teen band. What follows is nothing short of harmonious collaborations as local high school performers dare themselves to go above and beyond. Emily Johnson (aka Emily Delia), a rising senior at Venice High School, incorporates the drums into her rendition of “Zombie” by The Cranberries, while Rise Barkan, a rising junior at Santa Monica High School brings together the whole band in his acoustic original “The Girl Who Could Fly”. The band closes out the evening with melodies and an improvised blues song – complete with audience participation.

The night sees seven acts in total. Following each performance, Hernández-Kolski and Silverstein asks the performer to remain on stage so that the two may share a few words; first-time artists are herald for their courage to perform onstage and are encouraged to keep coming back, while more seasoned Downbeat attendees are given honest, helpful critiques and points of praise. Occasionally, Hernández-Kolski and Silverstein will even throw in an optional homework assignment for a performer.

“It’s always about feedback,” Silverstein tells me that Downbeat, “isn’t just an open-mic. We are helping [students] to refine and redefine [their] voice.” For Hernández-Kolski, Silverstein, and Dj Jedi, the mission of Downbeat has been clearly defined from the get-go: foster a safe and supportive environment for high school students to find their voice within the creative realm. Madeline Davis, a graduated senior from Hamilton High School attending Downbeat for the second time, explains to me that she came to Downbeat once, “and fell in love.” Davis goes further, telling me that from the second she got to Downbeat, she felt completely welcomed.

Another graduated senior and saxophonist-of-the-evening Elliot Rick speaks to Hernández-Kolski and Silverstein’s emphasis on feedback. “They’ve been performing for years,” Rick explains, adding that their advice is very valid. When asked to summarize the evening, Rick states simply: “everyone jammed…had a good time. It’s wonderful.”

Following the evening, a group of performers and audience members pile into three separate cars and head to Menchie’s. Over frozen yogurt, Wyndham Rothblatt, a rising senior at Santa Monica High School sums up his thoughts on Downbeat in five words: “this place is like family.” The evening culminates in a heartfelt rendition of “Hallelujah” on the corner of Lincoln Boulevard and Montana Avenue.

Downbeat 720 convenes on the second and fourth Tuesday of each month at the Miles Memorial Playhouse, 1130 Lincoln Blvd., Santa Monica, 90403. Showtime begins at 7:20 p.m. and admission is free.

Eli Ricanati is a graduated high school senior and local Santa Monica resident. He will be attending the University of Pennsylvania in the fall.