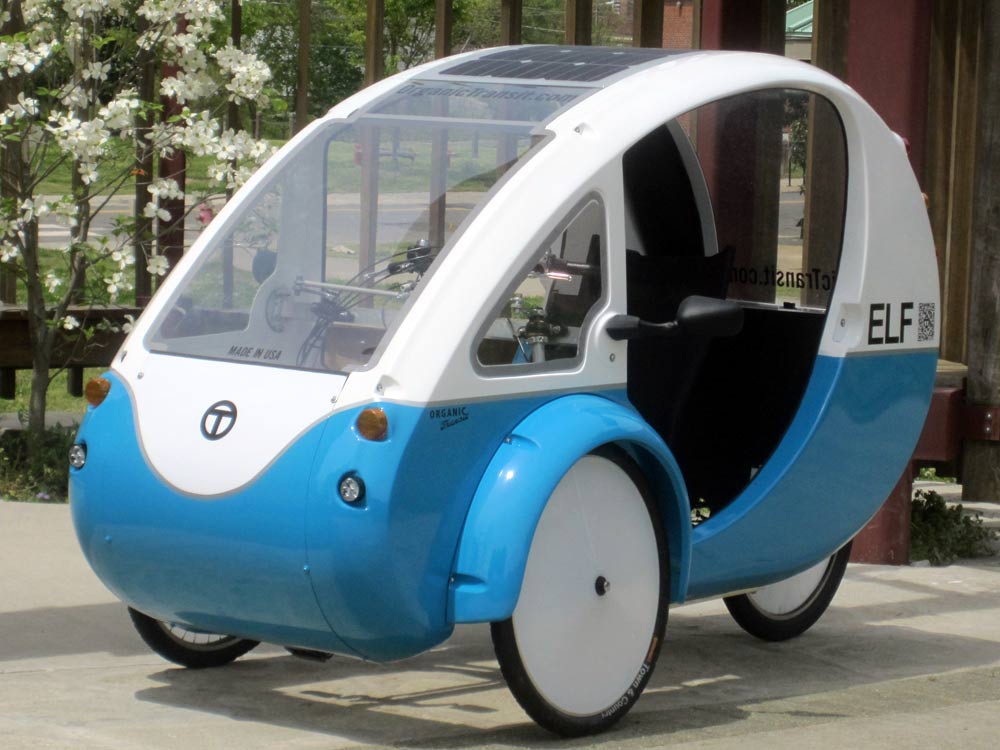 Created by Organic Transit, the Electric, Light and Fun (ELF) was on display in Santa Monica recently, with a view to providing an alternative zippy mode of transport for our busy streets.

Specs-wise, the ELF is a local commuter’s dream. Weighing in at 160 pounds, the ELF has the ability to carry almost three times its weight – 550 pounds. Equipped with a 100-watt solar-paneled roof, the ELF independently charges in seven hours; or two hours if the Lithium-ion battery is plugged in. The ELF also has pedal power capabilities.

According to the Code of Federal Regulations (CFR), the ELF is legally considered a bicycle; no license or insurance is required to own and operate the vehicle. For Santa Monica residents, this means access to both roads and an extensive network of bike lanes.

Santa Monica has the potential to be the epicenter of the ELF movement, according to the founder of Organic Transit and ELF inventor Rob Cotter. Santa Monica “is amazing, and always has been, for innovative thinking,” Cotter said.

More than 20,000 households in Santa Monica have two cars, according to Data USA. The Environmental Protection Agency (EPA) claims that “a typical passenger vehicle emits about 4.6 metric tons of carbon dioxide per year.” The ELF has zero emissions.

“I think that eventually, a lot of two-car families could use one car and an ELF,” Michael Hastings, ELF investor, told The Mirror.

While some commuters have questioned the safety of the ELF, Cotter said that the vehicle is a good alternative compared with its rival, the bicycle. Equipped with “crumple zones,” seatbelts in the back, three-wheeled stability, easy spotting due to size and colors, all-LED turn signals, brake lights, and headlights, the ELF is superior in safety, according to the inventors.

“We have basically taken the highest-end of bicycle technology and are getting car-like performance and usage out of it,” Cotter said.

There’s slim chance of getting your ELF stolen, as a new app will soon shutdown the ELF the moment the driver walks away.

For more information on the ELF, visit www.organictransit.com.

Eli Ricanati is a graduated high school senior and local Santa Monica resident. He will be attending the University of Pennsylvania in the fall.