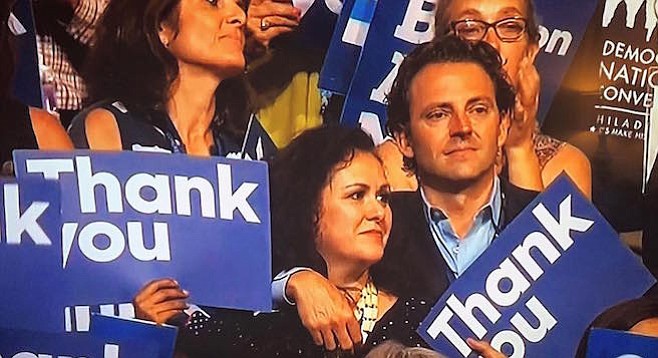 For most Californians, the year-2000 Proposition 34 was little more than a meaningless formality. But not to politicians or political party officials.

The 18-year-old initiative sets inflation-adjusted limits on what individuals and organizations can donate to candidates, ranging today from $4,400 for state legislative races to $29,200 for those running for governor. But there are no limits on giving to state and local political parties or how they can spend that money.

This gets little notice from most Californians, even those who examine the fine print on election-time mailers to see who is behind them.

But it surely means a lot to politicians and their parties. The power these rules give parties to launder money earmarked for particular candidates was behind the bitter and very close race last winter between Eric Bauman and Kimberly Ellis over who would be the next chairperson of the California Democratic Party.

But perhaps the most dramatic and clear-cut example of political parties’ power to launder cash and pass it along to intended recipients involved a locally well-known power couple during the spring primary campaign in San Diego County.

The couple: Democratic state Assemblywoman Lorena Gonzalez Fletcher and her husband Nathan Fletcher, a former Republican whip in the Assembly and a two-time loser in runs for mayor of San Diego.

Fletcher, who converted from Republican to Democrat in 2012 and 2013, with an intermediate stop as an independent, was one of five primary election candidates this spring for a seat on his county’s Board of Supervisors, getting large-scale financial support from the local Democratic Party and some from the county’s labor unions.

But nothing matches what he’s gotten from his wife. By the end of the primary season, Gonzalez Fletcher had transferred $355,000 of her Assembly campaign funds to the county’s Democratic party, far outstripping other San Diego politicians like state Senate President Toni Atkins ($16,000) and Democratic Assemblyman Todd Gloria ($9,000).

The reason was obvious. While Gonzalez Fletcher was giving the party enormous sums, the organization was passing much more to her husband – a total of $680,000, of which he got $188,000 in just one week. So there’s little doubt that Gonzalez Fletcher’s campaign funds were staying in the family.

The most obvious example of this happening came one day in May, when she gave $50,000 to the party and the very same day the organization spent the identical amount on behalf of her husband’s campaign.

There was nothing the least bit illegal about any of this. But it’s doubtful California has ever seen a more obvious example of a local party laundering money on behalf of a candidate and his chief donor. Of course, the party could not, did not, use the money to do anything but market its candidate to registered Democrats.

But that meant Fletcher himself did not have to send mailers or fund phone banking aimed at Democratic voters. Instead, he could concentrate on outreach to voters with no party preference or even to Republicans.

One thing wrong with all this is that voters have no direct way to track where the money actually comes from. Sure, they know Gonzalez Fletcher and her husband are close allies. But they don’t know just whose money that was previously given to the Gonzalez Fletcher campaign account went to Fletcher. So no one can really be sure who he’s beholden to if and when he takes a seat on the county board. Which makes it difficult to track his motives in votes on development and other key issues.

That’s the trouble with the entire current state campaign funding system. And it seems legislators want to keep the current opaque system in place indefinitely. About a year ago, they killed a bill making gifts to political parties subject to the same limits imposed on donations to candidates.

Today’s disgraceful and easily exploited system is a major legacy of former Democratic Gov. Gray Davis, recalled in 2003 partly because of his own questionable fund-raising practices. If it remains in place, it will be because of ignorance or indifference by California voters, who could employ a ballot initiative to change the system anytime they like.